Champions stepping up to save turtle doves in 2018 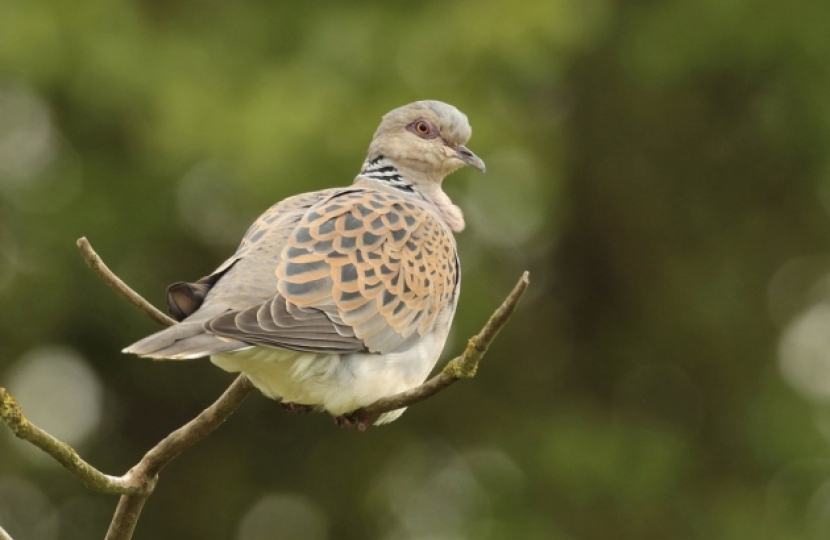 June has been a BIG month for turtle doves. One of the UK’s (and Europe’s) most threatened birds, their plight has inspired farmers, politicians, birders and nature-lovers to step up to help save them. We reflect on what could prove to be a pivotal time for this perilously rare summer visitor and British breeding bird.

Today, nature-friendly farmers from around the country are meeting with MPs in Westminster to champion farming that works for nature as well as for food production and farmers. After visiting turtle dove-friendly Suffolk farmer Nick Oliver a few weeks ago, the turtle dove’s new Parliamentary Species Champion will be among those MPs who meet, speak and listen to these farmers and their hopes (and fears) for the future of British farming after Brexit – something that has the power to make or break the prospects for saving turtle doves in the UK.

Over on the continent, turtle doves have been thrown a vital lifeline in Europe with the launch in Brussels at the end of May of a new EU Species Action Plan for the declining bird. Back on this side of the channel, farmers and landowners in turtle dove hotspots are starting to roll out a new measure it is hoped will help prevent further losses: supplementary feeding (think feeding your garden birds, but in a bigger scale and on farmland).

Around 20,000 farmers and agricultural professionals attended the Cereals arable farming event in Cambridgeshire at the beginning of June. The RSPB spoke to hundreds of visitors to its turtle dove themed stand about nature-friendly farming, with guest farmers explaining and advocating the viability of farming that looks after wildlife as well as producing food and giving farmers a living.

If we’re able to capitalise on these and other efforts being made on behalf of turtle doves, together they may just mean we are able to prevent the loss of this beautiful and culturally iconic bird from our countryside.

Arguably the UK’s most threatened bird, numbers of turtle doves breeding here in the summer have been plummeting for decades. Since 1995, they have fallen by 94%. Put another way, for every 20 turtle doves in the UK in 1995, today just over 20 years later there is just one. The turtle dove is truly a bird on the brink, but why, and what role do farmers and politicians have to play in saving them?

Why do turtle doves need saving?

Like the now extinct passenger pigeon – once thought to have been the most numerous wild bird on earth – turtle doves face multiple threats to their survival: from habitat loss in sub-Saharan Africa where they spend the winter, to hunting and trapping in Africa and southern Europe (more on that later) on their migration back to their breeding grounds, where they then have to contend with shortages of food and suitable habitat for nesting in the countryside here and elsewhere in Europe.

The key to understanding the drastic decline seen in the UK though lies in one key fact: turtle doves breeding in the UK today have, on average, half the number of nesting attempts as they did in the 1970s. In the 1970s the average turtle dove would have at least two nesting attempts per season, today they are not even managing one. Effectively their chance of successfully rearing young today is less than half what it was in the 1970s.

Why do turtle doves today only try to nest once, if at all, when their ancestors would nest at least twice – often three times – in a summer?

Studies of turtle dove nesting point to one critical factor – food. Or lack of it. Turtle doves feed on the seeds of annual arable plants that grow around the margins of and on ‘unproductive’ farmland and disturbed ground. The abundance of these plants in the British countryside has decreased drastically since the 1970s and even before that, driven by agricultural policies with their origins in the post-Second World War drive to increase production and ‘feed the nation’.

Without food, turtle doves are struggling to get into the peak physical condition they need to be in to breed fast enough to give them a chance to nest even once, let alone twice or more in a summer. Now that we know the why, how can turtle dove champions, whether they are MPs or farmers, help?

Some of those nature-friendly farmers visiting Westminster today, and many others like them in the hotspots around the country where turtle doves are still found, are already doing what they can to address the problem of food availability. By planting strips of wildflower mix containing plants bearing seeds that turtle doves eat, they are replacing lost foraging habitat. By allowing hedgerows to grow thick and dense they are creating nesting habitat. This year, with support and advice from Operation Turtle Dove, a partnership dedicated to saving the turtle dove, they are also putting out supplementary seed food to help turtle doves where seed bearing wildflower strips aren’t able to do the whole job on their own.

Currently, farmers and landowners can apply for financial support to help cover the cost of using some of their land to feed and house turtle doves through the Countryside Stewardship ‘agri-environment’ scheme. As things stand, Countryside Stewardship is funded through our membership of the EU and our Common Agricultural Policy (CAP)-derived farming policy and payments system. Not un-ironically, since its introduction the CAP has also presided over (and arguably been largely responsible for) a lot of the changes in our farmed landscape that have wreaked havoc on wildlife including turtle doves, such as the grubbing out of hedgerows and reducing the unkempt margins around fields. Leaving the EU means that the UK has a chance – the best in several generations – to reform our agricultural policies to better look after wildlife and the environment, and crucially for turtle doves, to support farmers to deliver targeted conservation action in the farmed landscape. This is where politicians have a role to play.

MPs like James Cartlidge stepping up to champion the conservation of some of our most at risk wildlife give threatened species a rare and valuable voice in the Parliament. For turtle doves, and for the farmers and nature conservationists working hard to save them, this could make a world of difference to how easily and effectively they are able to implement the measures needed to bring these precious birds back from the brink.

Published by the RSPB.