Community campaign to raise £150,000 for vital repairs to St Mary's Church in Stoke-by-Nayland off to flying start 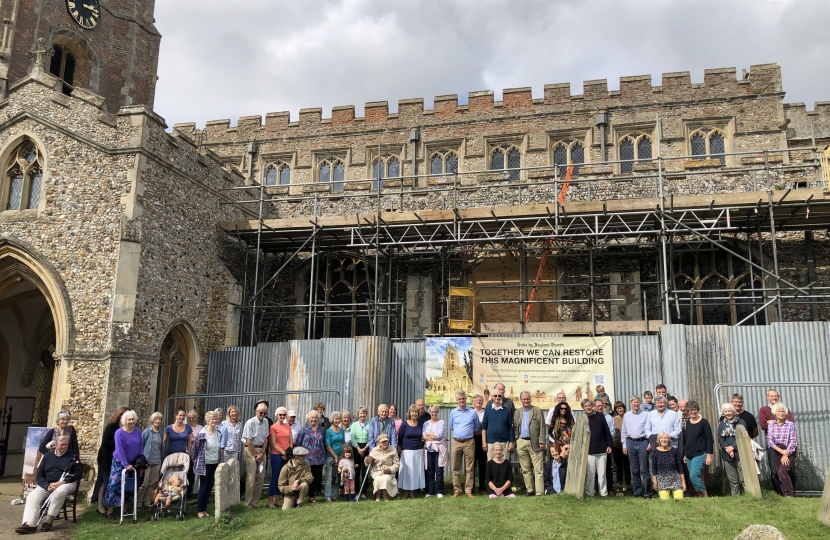 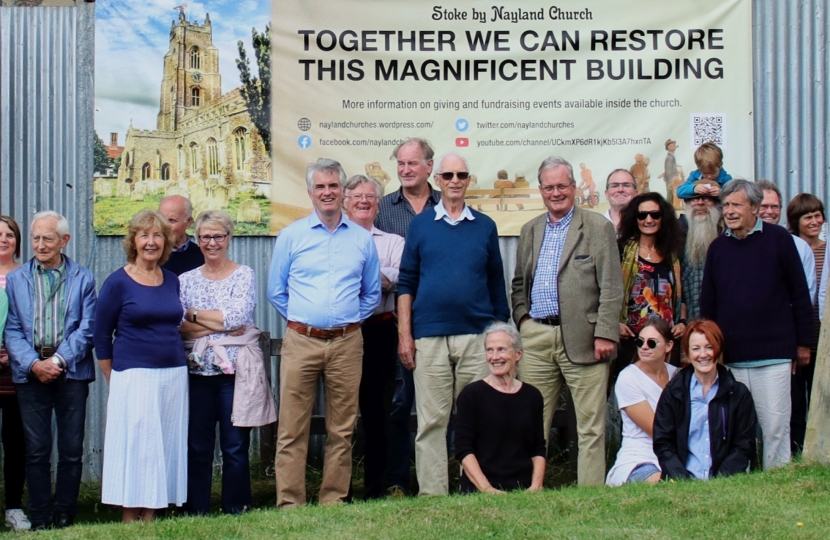 A £150,000 appeal to urgently restore a centuries-old landmark, following a significant collapse last year, has got off to a flying start after reaching a third of its goal in just one week.

Villagers were joined by their local Member of Parliament on Monday, as they gathered in support of the St Mary’s Church Fabric Repair Campaign, seeking funds for essential repairs to preserve the building for future generations.

A large section of flint on the southern side of the building, which has stood in its current form since the 15th century, collapsed in October 2020, also damaging the parapet above and the stonework of the window below.

Martin Owen, of Stoke-by-Nayland Parochial Church Council, explained the whole southern aisle wall would need to be taken back and the outer facing masonry rebuilt, to bind with the rubble core.

He told Suffolk News that old buildings like St Mary’s are in “a constant cycle of repair and maintenance”, but the extent of the damage in this instance had prompted them to turn to the community and grant funding for support.

“St Mary’s is a wool church and a landmark feature,” he said. “It sits on top of a hill and looks at the Dedham Vale and Stour Valley. It’s featured in a lot of Constable’s paintings, because it’s so photogenic.

“We’re back to being open daily, so we get a lot of visitors during daylight hours. It’s open for both religious and community events. It has got fantastic acoustics, so it’s great for recording music and for live concerts.”

Mr Owen confirmed that, so far, the campaign has raised £50,000, of which £30,000 has been pledged by the Friends of St Mary’s, and there are plans to apply for grants from bodies such as the Historic Churches Trust and the Heritage Lottery Fund.

“The appeal has got off to a very good start,” he added. “We hit the 30 per cent mark very quickly.

“We hope to start building work next spring, so we’re very much hoping to have the funds in place by then.”

The appeal has been backed by South Suffolk MP James Cartlidge, who pledged to support any formal bids for public funds.

He also confirmed he is raising money for St Mary’s in this year’s Ride and Stride event on September 11, with donations accepted online here.

“While it was sad to visit St Mary’s and see the significant damage suffered by the church’s structure, it was equally heartening to see so many people from the local community turning out to lend their support,” said Mr Cartlidge, who has been in office since 2015.

“It is clearly going to take some serious fundraising efforts to raise the necessary £150,000, but I am delighted that the sub-committee responsible has already got under way with the task of reaching their ambitious target.

“Of course, the issue of physical upkeep affects churches in many other Suffolk communities so I recommend as many people as possible participate in Ride and Stride, which raises funds for precisely this cause.”