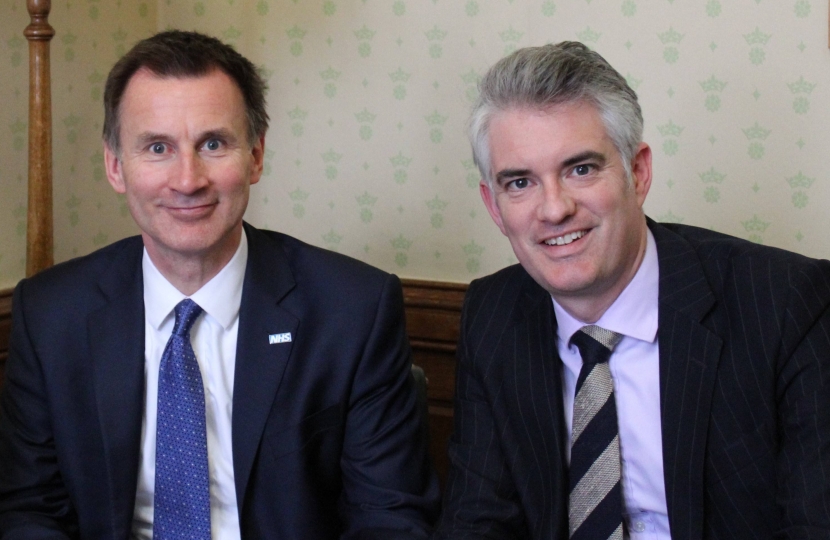 I will be backing Jeremy Hunt for the leadership of the Conservative Party. My over-riding reason is that in politics it’s not what you say that matters, but whether you can be trusted to deliver what you say in reality. As a party we face a chronic crisis of trust. We promised at the last general election to deliver Brexit and have failed to do so. Hence, we are being pummelled in elections with voters deserting us for the Brexit Party and Liberal Democrats. We therefore need a leader who not only promises to deliver Brexit – as all serious contenders do – but who has got what it takes to deliver that promise in practice.

Having had the great privilege to work closely with Jeremy as his Parliamentary Private Secretary (PPS) at both the Department of Health and the Foreign Office, I genuinely believe he is the candidate who can do the deal in the corridors of power where it really matters. Yet he also has a really inspiring vision for life after our departure from the EU which is compelling, ambitious and radical.

Basically, Jeremy walks the walk. Many talk about backing business – he started a successful company from scratch that has gone on to great things. Others will say they can negotiate – Jeremy has made deals all his life. His most important deals have been in politics: negotiating the BBC license fee; the junior doctors’ dispute (the longest running such stand off since the miners’ strike); a generous long-term funding settlement for the NHS; and more recently, contrary to anyone’s expectations, getting the various warring parties in the Yemen around the table to try and move to peace amidst the world’s most terrible humanitarian catastrophe.

But it’s not just about negotiation; the next phase of Brexit will also be about pressure. Our Prime Minister will have to be able to cope with the most intense pressure whilst negotiating our way out. As a PPS, you are there when your Minister is under pressure. I have seen, at first hand, the impressive manner in which Jeremy handles Commons Statements and moments of critical decision-making – in both Health and Foreign Policy - where the stakes were literally a matter of life and death. Jeremy did not become the longest serving Health Secretary, at a time of unavoidable austerity, by accident. He has that crucial ability to govern.

As Foreign Secretary Jeremy has proven that he can deliver on the global stage, striking up good relationships with world leaders from Trump to Macron. He has shown an optimistic view of Britain’s place in the world that is nevertheless grounded in realism, especially in the face of an ever stronger China. Quite simply, Jeremy Hunt understands that in the long run it will be our economic strength that determines and underpins our ability to handle future foreign relations with Beijing and elsewhere. Hence, his commitment to slash corporation tax to 12.5% (the lowest in the EU alongside Ireland) to light up a massive post-Brexit signal that we are open for business.

I am delighted that we have already seen in depth during caucus hustings that the Conservative Party is fortunate to have a slate of candidates with talent. Whoever wins, we must rally round and unite so that we can deliver Brexit and then move on to the other critical issues facing the nation. Jeremy Hunt understands this implicitly: he wants to negotiate a new Brexit deal, which I am convinced he can deliver, so that we can move on to deliver a program of radical social reform, supported by a strong economy.

We need someone who can reunite our party and our nation - I am 100% confident that Jeremy Hunt is that candidate.