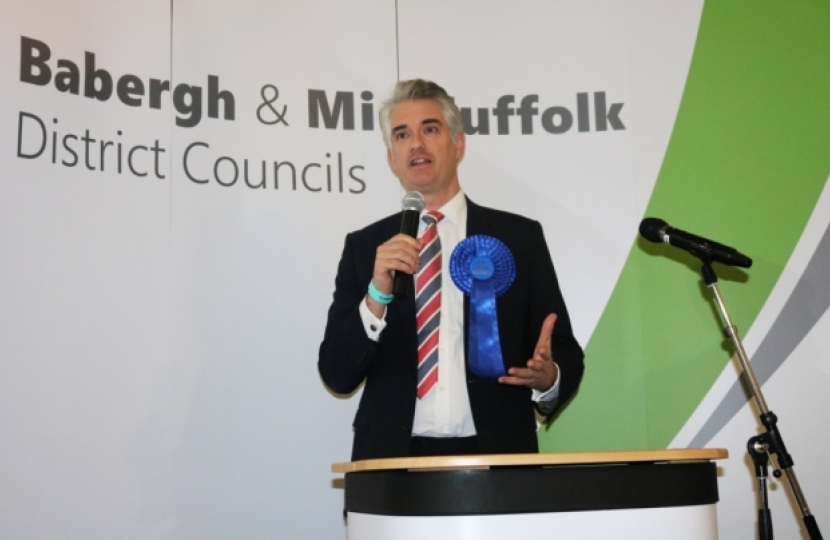 James Cartlidge has been re-elected for South Suffolk after securing a 22,897 majority over Labour.

Conservative Mr Cartlidge, who has represented the seat since 2015, secured the record majority since the seat's inception in 1983 , clocking up 33,270 votes.

Second was Labour's Elizabeth Hughes who secured 10,373 votes, with David Beavan (Liberal Democrats) with 6,702 and Robert Lindsay on 3,144.

Mr Lindsay was not present for the count, held at Endeavour House in Ipswich, while he has been recovering from illness.

It was another strong results for the Conservatives, with Mr Cartlidge upping his majority from the 17,749 lead he had in 2017.

He said: "I feel incredibly privileged and grateful to the people of South Suffolk for voting for me again.

"It's the third time in four years we have had a general election, I am very pleased to have such a strong majority.

"The key thing is we have now got a job to do. We have had this period of instability in the country, the public were fed up that we couldn't agree as politicians a Brexit deal and now it looks like we are going to get a strong majority nationally and deliver the Brexit deal, finally move on and get the country moving again."

Mr Cartlidge said he recognised the divisions Jeremy Corbyn had made with Labour voters, but also highlighted the Conservatives' clear approach to Brexit as a key factor.

"I think the country was crying out for leadership for moving forward," he said.

"We have had this period of terrible instability - a sense that Parliament was going nowhere - and basically we were becoming a laughing stock as a country. We just couldn't move forward, we were stuck.

"We needed a strong majority to break that logjam, to move the country forward and I think that's what the people have voted for.

"When you knocked on doors, yes they did often mention Jeremy Corbyn and he was very unpopular with Labour voters and I think that has been borne out in those extraordinary gains we have had in traditionally safe Labour seats.

"But I think the most positive thing from our point of view is they saw the possibility of a Conservative majority settling and calming the instability we have had.

The results in full:

James Cartlidge is seeking re-election as the Conservative candidate for South Suffolk, having served as its Member of Parliament since 2015. He lives in Assington and three of his four children attend Boxford Primary school.