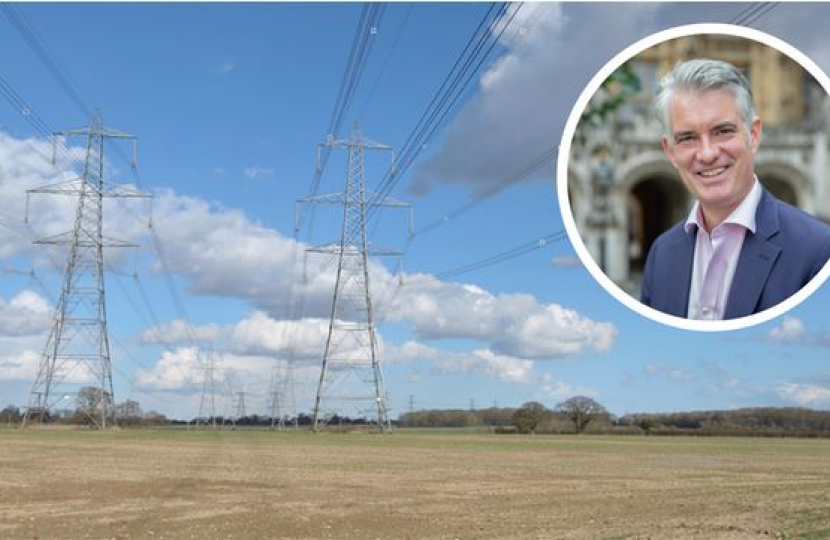 The South Suffolk MP James Cartlidge has spoken out against National Grid's proposal to build 180km of electricity pylons connecting Norwich to Tilbury in Essex via a substation in Bramford. He says undersea cabling ought to be considered as an alternative.

Undersea cabling must be considered a viable alternative to pylons cutting through the Suffolk and Essex countryside, an MP has said.

James Cartlidge, MP for South Suffolk, also stressed local people must be given the opportunity to put forward their views on such options when considering controversial pylon plans.

National Grid has put forward proposals for East Anglia GREEN, which would see a 180km network of high voltage pylons built to connect Norwich to Tilbury in Essex via a substation in Bramford.

Mr Cartlidge said: "For strategic and economic reasons, and for the crucial need to protect our countryside, I believe that we should maximise the use of offshore cabling through a coordinated offshore grid."

Mr Cartlidge said that he had been in talks with National Grid about the costs of undersea cabling compared with underground routes and traditional pylons.

However, he argued that there are still “powerful arguments in favour of the subsea route.”

The “most important point” Mr Cartlidge continued, was the fact that “the south of Bramford stretch of Anglia Green was considered as an undersea route called Sea Link 2."

“This option was rejected.

“In my view, given we are meant to be consulting on the route for Anglia Green, the public should be able to express their views on that original choice, and not just be limited to a narrow corridor of traditional overland pylons.”

“At the very least, local people should get a chance to express their view on this top-level choice, instead of being faced simply with a set of unpalatable ‘traditional’ options.’”

He said other parts of the country were seeing "significant expenditure" on undersea cabling to avoid impact on rural areas, and questioned why it couldn't happen here.

National Grid is holding a public consultation on its proposals, which will run until Thursday 16 June 2022.

Liam Walker, project director for East Anglia Green, said: “This reinforcement between Norwich and Tilbury is essential to carry more clean energy to homes and businesses across the UK, and to help the country reach net zero by 2050.

“We hope local residents will be able to join us and hear more about what we are proposing and give us their feedback on our plans.”

Details of how to comment and to find out where there are public information sessions visit the National Grid website.