My response to the Bramford to Twinstead Consultation 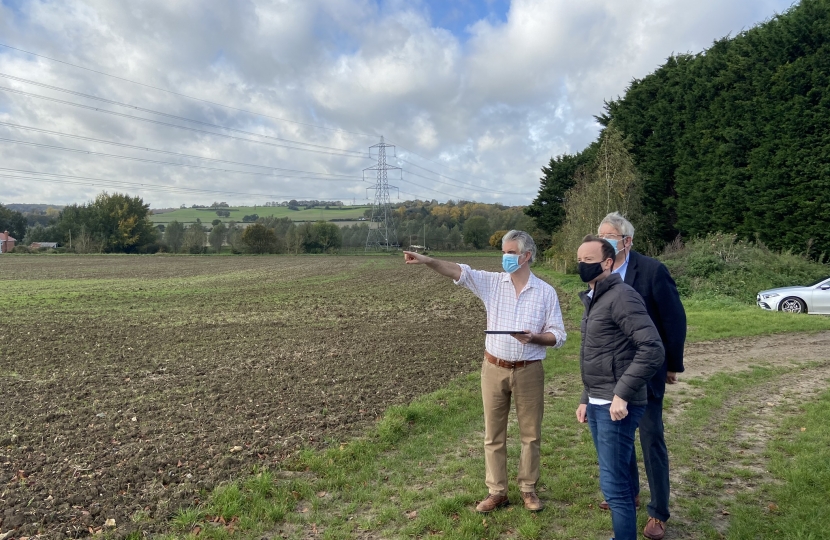 As the Member of Parliament for South Suffolk, the majority of the route sits within my constituency, and thus affects a substantial number of the communities that I represent.

As an East Anglian MP, I am enthusiastic about the employment and business opportunities that the renewable energy industry provides for our region, ensuring that our part of the UK will play an oversized role in the country’s path to Net Zero. That said, I am conscious that as we map out our route to a more sustainable future, we have to balance the impact of economic development with resultant impact on the beautiful countryside of Suffolk, doing everything possible to ensure that it is protected for current residents and future generations.

My consultation response focuses on three separate considerations: the timing of the consultation; the need for greater undergrounding on the proposed route; and the principle of increased offshore electricity transmission.

Firstly, I would like to outline my disappointment that National Grid have not paused this consultation until more information about the route of a newly-proposed line, ATNC, has been announced. As the Rt Hon. James Cleverly MP, Sir Bernard Jenkin MP, Dr Dan Poulter MP and I outlined in our letter to the Energy Minister, Rt Hon. Anne-Marie Trevelyan MP (and copied to National Grid and National Grid ESO executives) on 23rd March 2021, I believe that the timing of this consultation is inappropriate as it does not allow for a proper assessment of the potential cumulative impact of these schemes. Many of my constituents and Parish Councils have written to me supporting my argument that we should have paused this consultation until the whereabouts of ATNC was confirmed.

The new ATNC line was first proposed in the Network Options Assessment (NOA) released in January 2021. While the proposed route has not yet been announced, through various illustrations in presentations to MPs shown by National Grid and National Grid ESO over the months following the release of the NOA, it is clear that ATNC could be delivered as a further ‘reinforcement’ of the Bramford-Twinstead (BTNO) route itself. National Grid will of course be aware that the recent UK High Court ruling overturning consent for Norfolk Vanguard emphasised the issue of ‘cumulative impacts’, when considering notionally ‘separate’ projects. I believe that my constituents would expect any consultation on such important and potentially impactful development to also consider ‘cumulative impacts’. As such, I am deeply disappointed that this consultation has continued at this time, as I do not believe that a suitable assessment can be made about the impact of the current BTNO scheme when another full 400kV line could be added to the route within a similar timescale.

Secondly, on the BTNO proposal as it currently stands, I believe that there is a need for a significantly greater level of undergrounding. This scheme only allocates underground cabling where the pylons would go through countryside formally designated as AONB. In reality this would mean that most new pylons on the route would remain above ground, and many constituents have contacted me to express their alarm at such a prospect, given the larger size of the proposed pylons (400kV). Additionally, in certain areas towards the beginning and end of the scheme, the route deviates from the existing infrastructure that is being replaced, so the impact would not mean an increase in scale, but significant new infrastructure where there had previously been open countryside, untrammelled by pylons.

In a letter from Lord Gardiner (Parliamentary Under Secretary of State for Rural Affairs and Biosecurity) on 4th May 2021 regarding your consultation (attached), he states that it is quite clear that National Grid has a duty under the Electricity Act 1989 to do what it can to “reasonably mitigate” the impact of its infrastructure on the natural environment. Crucially, he states that “this is not limited to areas designated as National Parks or AONBs”. In his letter Lord Gardiner concludes by stating that he is happy for his letter to be shared more widely “to make the case for fully undergrounding the transmission line in the Stour Valley to protect its cultural, heritage and scenic beauty”. I believe that this is a significant intervention by a Government Minister and I would welcome a greater degree of undergrounding on the plans that National Grid submit for the Development Consent Order (DCO). I am also concerned about the visual impact of the substations, and ahead of the formal consultation stage, I would like to receive more information about the work that National Grid are undertaking to mitigate the impact of these stations on their surroundings.

Specifically, I would be grateful if NG would confirm their receipt of, and understanding of, the statement by Lord Gardiner in respect of undergrounding being needed in the Stour Valley not just in the formally designated AONB.

Finally, I am a strong proponent of an offshore transmission network. On BBC Radio Suffolk, Graeme Cooper (National Grid), explained that I had referenced the upgrades on the BTNO route as “necessary”. To clarify, I understand that in order to develop a world-leading renewable energy industry, and achieve net zero by 2050, electricity will need to be transmitted differently across our region. However, I have certainly never said that this should all be by way of overland pylons. In some areas this will require upgrades to existing infrastructure, and in others, brand new infrastructure will be required. I believe that in order to protect our precious countryside we must look to transmit as much electricity from its point of creation (the East Anglian coastline), to its point of use (the major metropolitan areas including London), via an undersea transmission network. Where this is not possible, undergrounding should be employed as far as possible to mitigate the impact on local communities, in line with the comments from Lord Gardiner.

As the formal consultation stage on BTNO approaches later this year, I believe that there is a substantial amount of information that is required from National Grid in order that a proper assessment about the impact of their plans can be made; above all, as soon as possible, we need to know the likely route of ATNC. I urge National Grid to consider seriously the comments that have been made by my constituents in this consultation, and hope to see more undergrounding and mitigations made to reduce what could be a substantial impact on a beautiful and unique area of countryside, including rural communities and villages for whom the real-life impact of electrical transmission infrastructure is a very serious matter about which they care a great deal.