My Response to the Bramford to Twinstead Consultation - March 2022 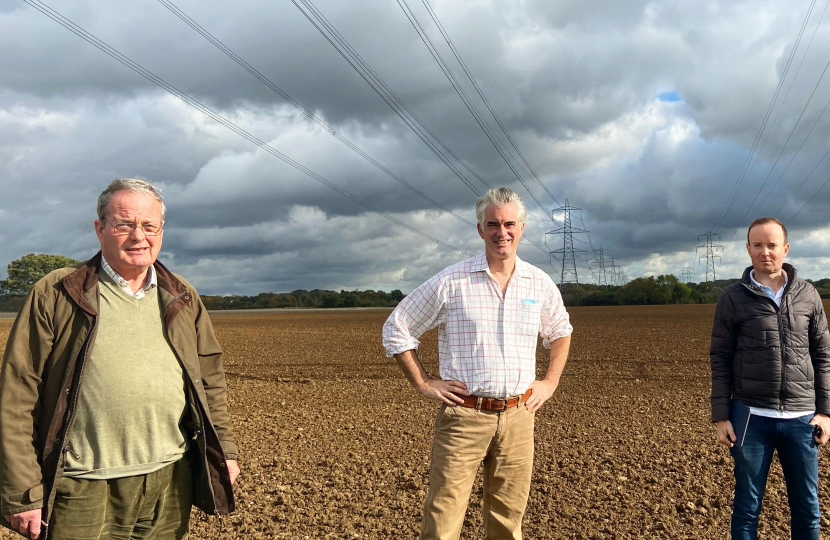 My response to the Bramford to Twinstead Reinforcement statutory consultation can be found below:

First of all, may I express my gratitude to your colleagues at National Grid for ensuring that face-to-face exhibitions were arranged in good time after the lifting of Covid restrictions. Secondly, and in particular, I am pleased that National Grid were able to confirm that the ATNC proposals will NOT include an additional run of pylons along the Bramford to Twinstead route.

As mentioned previously in my response to the non-statutory consultation in May 2021, the majority of the route sits within my constituency of South Suffolk, and thus affects a substantial number of the communities that I represent.

My consultation response mainly focusses on three elements of the proposals: the route around Hintlesham Woods; the need for greater consideration for tourism; and the location of the Dedham Vale East sealing end compound. Ordinarily, I would not usually comment on specific local planning matters, but the proposals affect many of my constituents, and the decision on development consent will ultimately be made by central Government.

Firstly, to limit the impact on my constituents, I would urge you to consider undergrounding as much of the route around Hintlesham Woods as possible – particularly in those areas where people haven’t previously been impacted by the overhead lines. I was pleased to see that two routes have now been proposed for Section AB – Bramford substation to Hintlesham. In principle, and with suitable environmental mitigation, I believe that Option 2 presents the best solution, when considering those who will be most adversely affected due to their proximity to the proposed pylons and overhead lines.

Secondly, I was disappointed that tourism hadn’t been considered as a factor in scope in the original proposals. I would therefore like to draw your attention to the significant artistic importance, and economic value, of Benton End in Hadleigh. Benton End is situated between Gainsborough’s House museum in Sudbury, and ‘Constable Country’ on the other side of South Suffolk, which includes Flatford and the site of John Constable’s world famous landscape ‘Hay Wain’ painting which is already a popular draw for visitors. Benton End is an historic country house which was formally owned by Cedric Morris, the celebrated artist and plantsman, and has been taken over by the Garden Museum to be developed into another significant heritage asset for the local visitor offer. Benton End was also the site of the East Anglian Art School where Maggie Hamblin (from Sudbury) trained, along with other well-known artists. As set out in the South Suffolk Taskforce report, this project enriches the offer of South Suffolk’s artistic and cultural heritage for visitors and should be a welcome addition to the tourism industry locally.

As the existing double run of pylons across the Layham valley is directly visible from Benton End, the current BTNO proposals have a significant impact on the view from the house, and any additional infrastructure may be off-putting for visitors to the historic artistic building. Due to the visual impact of these lines, there is a strong argument for extending undergrounding throughout the Layham Valley, provided that the sealing end compound required could be built in a suitable and appropriate location, with appropriate screening and minimal detriment to individuals and the environment. In order to protect the view from Benton End, and to prevent an adverse impact on tourism, I would strongly welcome consideration of all possible mitigation in that area. I would also like to ensure that the value of tourism, and the cumulative potential economic value of a coordinated marketing approach based around these three pillars of world famous heritage, are considered alongside any proposals for additional infrastructure moving forward.

Thirdly, having recently visited the pylon route in Polstead, in principle, and subject to detailed planning considerations, it would appear less disruptive for the Dedham Vale East cable sealing end compound to be sited in the nearby Layham Quarry, instead of the proposed location near Millfield Wood, Polstead. Naturally, this would depend on favourable logistical and practical circumstances.

I am aware that you will have received other specific proposals from my constituents and their representatives, including Parish, District and County Councillors. The above includes specific points raised with me, that I am either endorsing, or which include strategic economic considerations (e.g. the local artistic heritage offer). Nevertheless, I urge you to consider all such proposals, particular those from my colleagues in local Government.