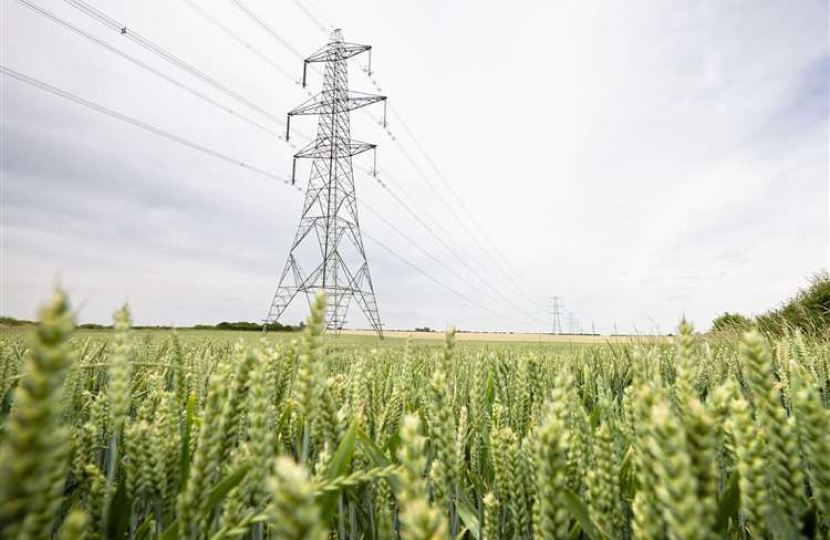 National Grid’s ‘East Anglia Green’ project is a proposed 180-kilometre power line reinforcement from Dunston in Norfolk to Tilbury in Essex, via the Suffolk countryside

The groundswell of opposition to pylon plans through the East of England has ramped up this week, with three councils objecting, and a local MP calling for 'a fairer deal' for Suffolk.

The public engagement period on National Grid’s ‘East Anglia Green’ project – a proposed 180-kilometre power line reinforcement from Dunston in Norfolk to Tilbury in Essex, via the Suffolk countryside – ends next Thursday.

Concerns about their potential impact have been raised by six of the region’s MPs, while a community campaign has collected more than 14,000 signatures for a petition against the proposals.

This week, Babergh and Mid Suffolk district councils both lodged formal objections to the consultation, calling instead for a 'co-ordinated offshore approach' – a view shared by the Essex Suffolk Norfolk Pylons action group.

Suffolk County Council also confirmed its intention to object as it believed there were 'better ways to manage the project' including an undersea network which it said had 'not been fully investigated'.

New figures on investment in offshore transmission cabling have also come under scrutiny after it emerged that East Anglia currently receives substantially less funding for such infrastructure than Scotland and the north of England.

James Cartlidge, MP for South Suffolk, said that, under current plans, the total mileage of undersea electricity transmission is 10 to one in favour of Scotland and northern England, despite the funding all coming from the same pot.

“National Grid argues that it is necessary to build new pylons across East Anglia, including south Suffolk, because the undersea option is not technically possible,” said Mr Cartlidge.

“In fact, undersea transmission around the UK is already a reality, it’s just that East Anglia is getting a far lesser share of investment.”

Meanwhile, the Essex Suffolk Norfolk Pylons campaign has now created its own questionnaire for people to give their opinions, to counter what it described as 'survey bias' by National Grid.

“It headlines the proposal as ‘East Anglia Green’, but there is nothing green about it.

“Questions put to people on their survey are loaded, blatantly biased and irrelevant.

“It asked, for example, whether people approve of green energy – but this has nothing whatsoever to do with their plans for the project."

According to consultation documents, the East Anglia Green development would comprise mostly overhead lines, plus underground cabling through the Dedham Vale Area of Outstanding Natural Beauty.

National Grid says the scheme will help the UK to achieve its ambition of net zero carbon emissions by 2050, by transmitting energy generated by wind turbines in the North Sea.

It explained that the current network of pylons in the region, which dates from the 1960s, will soon be unable to transmit the amount of electricity being created, so a reinforcement would be needed before the end of the decade.

However, the Essex Suffolk Norfolk Pylons action group argues that only one option had been presented to the public, suggesting that there are other alternatives that need to be assessed and presented for consultation.

Rosie Pearson said the National Grid survey failed to address 'real public concerns', including the proposed power line’s effects on health, wildlife and finances, as well as the long-term planning around power distribution.

“People affected by this project must have their say – without the risk that their opinions could be used against them to demonstrate support for a highly damaging programme that National Grid has not even proved is needed.

“We also wanted to ask people their views on other options, such as a strategic offshore grid.

“Indeed, a sub-sea grid was found by National Grid themselves to offer environmental and socio-economic benefits – plus a huge £6 billion saving for consumers – but this option has not even been presented to us,” she added.

Figures confirmed by the Government indicate that the forecast cost on a proposed undersea electricity cable from Sizewell to Kent is £1.2 billion.

This is compared with £4.42 billion being spent on offshore cables running from Scotland to Wales, and Scotland to the north east of England

To view the National Grid consultation, go online to www.nationalgrid.com.

Go to www.pylonseastanglia.co.uk to see the petition set up by the Essex Suffolk Norfolk Pylons campaign group.

Mr Cartlidge, who co-founded the Off-Shore Electricity Grid Taskforce (OffSET), said bill payers in the east of England should receive a greater share in line with other regions.

He said: “My constituents would surely want to know why so much more funding can be spent protecting hundreds of miles of countryside from pylons in Scotland and the north of England, when similar investment off East Anglia would give us similar capacity to onshore pylons.

“We’ve got confirmation that all this offshore transmission funding comes from the same pot – electricity bill payers.

“Surely bill payers in East Anglia are as entitled to see offshore cabling prioritised as those in other parts of the country?”

Meanwhile, concerns about the 'lack of co-ordination' around energy infrastructure in East Anglia have been highlighted by Babergh and Mid Suffolk district councils, which formally objected to the East Anglia Green proposals.

The councils approved their joint objection to the National Grid consultation, pointing to an absence of clarity over the options for 'strategic offshore co-ordination of transmission reinforcement'.

The authorities also questioned why a sub-sea alternative to the pylon proposals had not been put forward.

Dave Busby, Liberal Democrat councillor for Copdock and Washbrook, said: "As far as we are concerned there is only one option, and that should be subsea.

"We should be resisting every industrialisation of our countryside.

"We are a rural countryside, we are rural counties - the tourists come to see us for that, and people live here because of that."

National Grid has proposed burying some of the cables underground through the area of outstanding natural beauty.

Independent Conservative council leader John Ward said: "A large number of people are currently potentially affected by it in terms of their wellbeing, as well as their house price values which inevitably will be impacted by it.

"It's causing a lot of people a lot of upset and anguish, so this particular issue must be resolved to set their minds straight."

Suffolk County Council has been campaigning for Government ministers and officials to introduce a 'more co-ordinated off-shore approach to meet the demands of all the energy projects in the region'.

Councillor Richard Rout, Deputy Leader and Cabinet Member for Finance and Environment, has written to the Minister of State for Business, Energy and Clean Growth.

He said: "The council absolutely supports ambitions for renewable energy and the government's commitment to meet the target of Net Zero by 2050. We recognise the benefits that can come from this project, and we continue to work with the government to develop coordinated off-shore transmission.

"However, the council objects to the proposal for National Grid’s East Anglia Green as it stands. I am determined that Suffolk will not suffer unnecessarily as a consequence, we will continue to protect our communities, residents and natural environment.

"Suffolk County Council has been lobbying government for 11 years on the issue of better coordination for off-shore transmission. We are demanding that a more collaborative solution is found to manage the different network connection requirements coming into Suffolk and East Anglia, and that all network options are fully explored."

National Grid has pledged to carefully consider all responses to its consultation on the East Anglia Green plans.

It warned that the existing infrastructure would not have the capacity to meet rising demand, as a result of increased renewable and low carbon energy generation by 2030, without reinforcement.