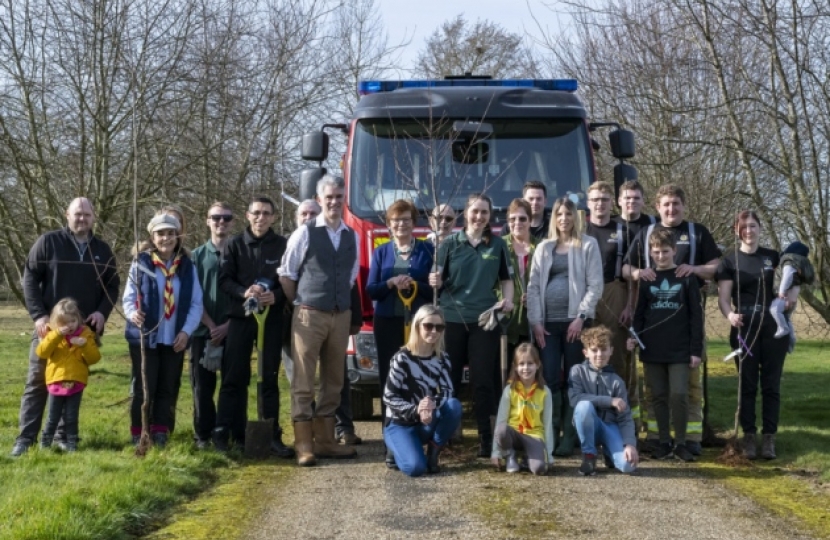 Volunteers behind a newly-installed community orchard in Clare believe future generations will benefit from the fruits of their labour.

More than 20 trees were planted at Clare cemetery at the end of last week, marking the launch of a scheme aimed at providing fruit for the entire community and cutting the town’s carbon footprint.

After receiving support from the council’s environment committee, funding was secured to plant fruit trees at the cemetery, as well as a smaller orchard at Clare Castle Country Park.

Cllr Neale told the Free Press the orchard will encourage people to eat local produce and decrease the need to buy expensive fresh fruit from external sources, thereby reducing the environmental impact of packaging and transporting it.

“It’s been a really worthwhile project, and I have been so lucky to have had so much support and help from the town,” she said.

“I would like to thank everyone who was involved and made it all possible.

“I hope future generations will cherish the orchard, and for it to continue to bring the community together.”

She explained the orchard will also provide a habitat for wildlife, as well as offer solitude for those who want to sit among the trees.

The team of volunteers, who planted 15 apple trees, two pear trees, a damson, a plum, a green gage and a quince, included four firefighters from Clare Fire Station, local Brownies guide Marie Rampling and four representatives of the Environment Agency, with support from the parish church.

Mr Cartlidge said: “I was so impressed with the huge effort put in by Davina and her team to deliver this excellent tree planting scheme. It really was a case of the community in action.

“On a previous visit to Clare Primary School, I spoke with pupils about their efforts to deal with plastic waste, and this underlines that this is a part of Suffolk which values the environment and the principle of nurturing it for future generations.”

Cllr Evans added: “This was a true community effort to plant the orchard which Clare residents will treasure for many years to come.

“Already, people are talking about the events that either can be hosted in the orchard, or using its produce, such as an annual apple day or jam making.

“Congratulations to Davina Neale, who led the project, and to all the volunteers who supported it.”

The project also hopes to benefit from Clare’s ongoing community beehive initiative, which will provide funding through the sale of locally-made honey, and enable the bees to pollinate the orchard.