No More A14 Delays Campaign 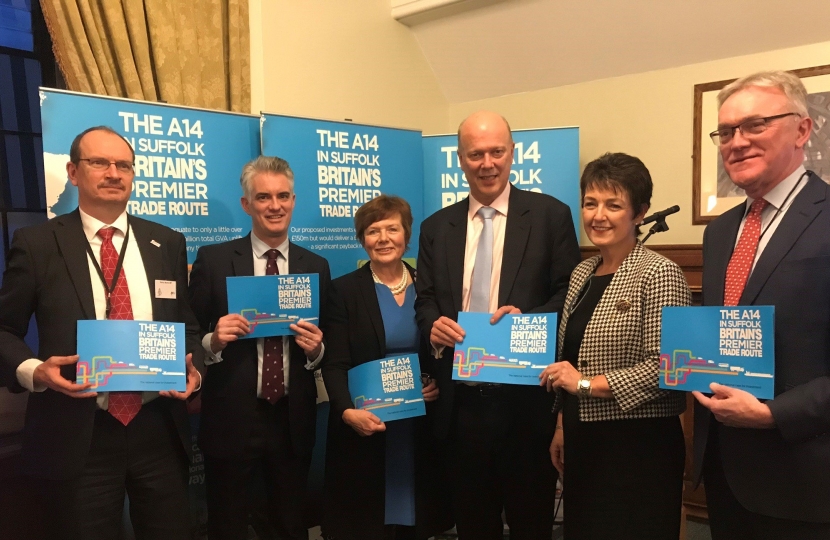 ‘It’s firmly on the radar’ – transport secretary acknowledges A14 problems

The A14 in Suffolk is not fit for purpose – for the region or nation – and needs major investment, transport secretary Chris Grayling has been told.

The warning was delivered in Westminster by a delegation of top business leaders and politicians backing the No More A14 Delays campaign, spearheaded by Suffolk Chamber of Commerce.

Hold-ups on the road are costing firms time and money – with evidence suggesting journey times have got much worse in the last few years.

Motorists also remain frustrated by delays around the likes of Copdock.

At the briefing on Wednesday, Mr Grayling said the project was “firmly on his radar”.

He said: “We understand the importance of the A14, its why we’ve got this huge project in Cambridge.

“I get the problem, understand the challenge. We are shaping priorities for coming years. We’ve got a whole range of projects that start, and we’ve got projects that need to happen. Believe me, this is firmly on my radar.”

The campaign highlights bottlenecks at seven key pinch-points on the road, particularly around Ipswich and Bury St Edmunds, and the impact  that has on the local and national economy.

Mark Pendlington, chair of the A14 strategy board, said the case for investment in Suffolk was “compelling”.

“The A14 is the golden economic thread that serves not only Suffolk, but the rest of the UK.

“It is Britain’s premier trade route between the UK’s biggest port and the rest of the UK. Most of the goods that are supplied and sold in the ‘Midlands Engine‘ and the ‘Northern Powerhouse’, for example, travel past us on the A14. ‘UK plc’ depends on us and what we do.

“This is not a dual carriageway into some cul-de-sac in Felixstowe.”

He added: “There is compelling evidence that says if the government was to invest only £150m, the value that the economy would reap would be over £1.5bn. We would get 30,000 jobs in the long term, and nearly 35,000 new homes. I think that’s a pretty good deal.”

She said: “Just as a Suffolk Punch was the workhorse of our county, Suffolk has been a proud workhorse for this nation. We make a huge contribution, nearly £17bn a year to the British economy. In terms of national spending, we are asking for a very small sum of money for these projects. It could unlock such a huge prize.”

The campaign received a major boost last year when Highways England designated the highway as a “current, planned and potential expressway”.

Expressways are motorway-grade two-lane highways and their designation requires that all junctions off and onto them are enhanced.

Since then the campaign has provided evidence to the Department for Transport’s consultation into the  Highways England report to ensure that the A14 is included in the final Roads Investment Strategy (RIS) 2.

The DfT is due to make a final decision as to which projects will be funded later this year.