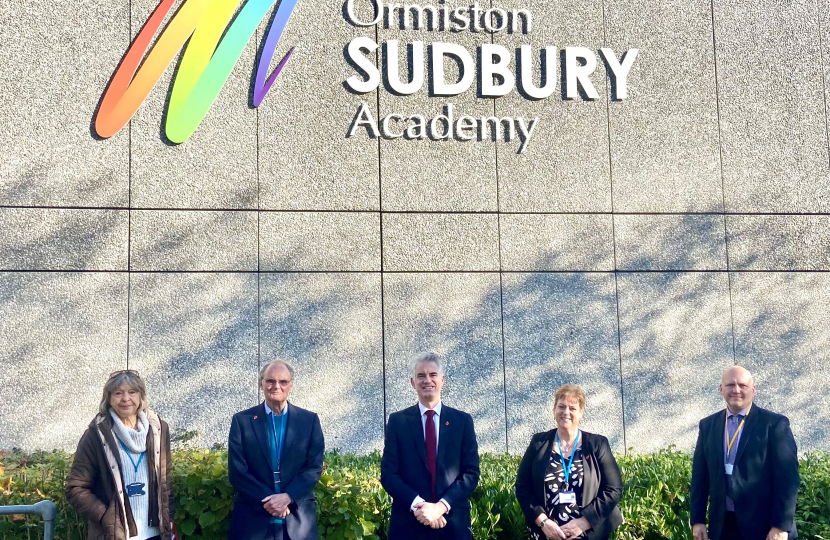 Fresh investment to enable a Sudbury school to refurbish and transform its facilities for a new generation has been confirmed, after it was named in the latest round of a government rebuilding scheme.

On Tuesday, Ormiston Sudbury Academy was included among 61 schools – and the only site in Suffolk – in the third wave of investment from the Department for Education’s School Rebuilding Programme.

The scheme was established to deliver improvements at around 500 school and sixth-form buildings across England, with the first 100 schools announced during two previous rounds of funding in February 2021 and June 2021, respectively.

Details of the planned work at Ormiston have not been specified, although last year, the school announced that it would temporarily mothball its sixth-form provision in September 2021, to allow for 'much-needed investment' in its infrastructure and resources.

“As a proud academy, which is part of Ormiston Academies Trust, we are fully committed to delivering the best possible educational opportunities to all our students, and that includes providing a teaching and learning environment which is inclusive, safe and inspirational for all students and staff.

“We are really excited to be taking this opportunity forward over the coming months, and we will continue to keep our community updated on our plans, as soon as we have more details.”

A spokeswoman for Ormiston Academies Trust confirmed that details of the exact refurbishments at Ormiston Sudbury Academy will be outlined in due course.

In January 2021, the Tudor Road-based school explained that a desire to invest in its sixth-form facilities had informed its decision to temporarily stop accepting students into Year 12, starting with the current academic year.

At the time, the academy told parents: “As you may be aware, we have been keen for some time to invest in our sixth-form provision, in terms of infrastructure and resources.

“This investment, over time, will mean we will be able to provide students with a superb sixth-form in an exciting new build, fully resourced and offering a wide range of both A-levels and BTECs.”

The School Rebuilding Programme’s latest round of investment follows an application process that took place earlier this year, which received nominations from 1,105 schools.

The Department for Education has confirmed that the rebuilding projects will be prioritised based on the conditions of each individual facility.

“Investing in our school buildings is vital to support schools and teachers in delivering a high-quality education, so that pupils gain the knowledge, skills and qualifications they need to succeed,” said a government statement.

“The Department for Education will continue liaising with responsible bodies, including local authorities, academy trusts or voluntary aided school bodies as appropriate, over the coming weeks, to establish each project and the timescales for the work.”

The funding for Ormiston Sudbury Academy was welcomed by South Suffolk MP James Cartlidge, who added that he had been aware of the need for investment in the school’s facilities for several years.

“I warmly welcome the news of this investment for Ormiston Sudbury Academy, potentially so significant when you consider the pressing need to improve its estate,” said Mr Cartlidge.

“In my various visits to the school since being elected in 2015, I’ve been conscious of the need to improve the school buildings at Ormiston, especially in light of previous investment into a new building for Thomas Gainsborough School.

“The bottom line for me – as backed up by feedback from the academy trust and principal Caroline Wilson – is that transformation of the building at Ormiston would help to drive educational standards, underlining that this type of investment is about improving the future prospects of pupils at the school.

“I have stressed this point in correspondence to the Department for Education and, in particular, in my recent meeting with the minister, Baroness Barran, earlier this year.

“Of course, while this is very positive news, we need to find out further detail of what exactly this entails and I will be in further correspondence with the department.”