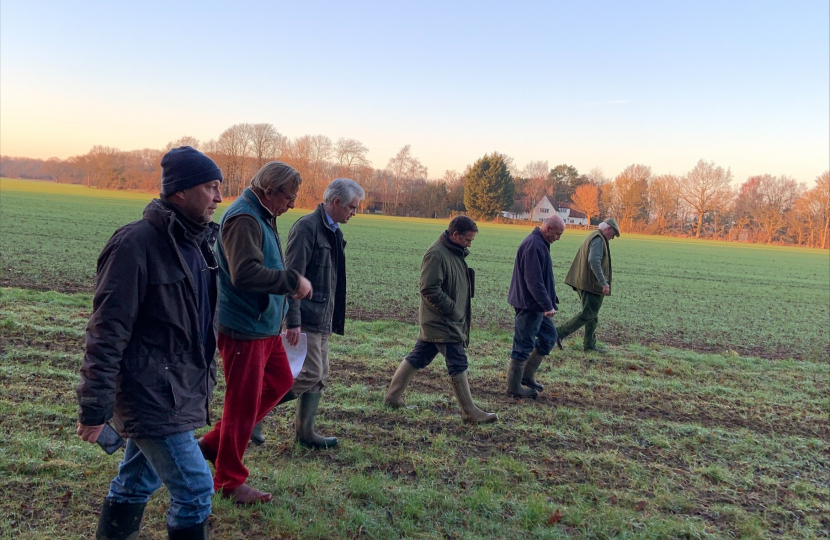 Calls are mounting from Suffolk political figures for an undersea electricity grid to be considered as an alternative to new power lines across rural East Anglia.

National Grid has published proposals for new power pylons from Norwich to Tilbury in Essex, running via the sub-station in Bramford, on the edge of Ipswich.

The pylons are needed by the end of 2030 to carry renewable and low carbon power to homes and businesses, National Grid said, and proposes the route to be mostly new pylons but with some undergrounding.

Conservative South Suffolk MP James Cartlidge last week said he had concerns about the impact near the Area of Outstanding Natural Beauty in his constituency.

He said: “To sufficiently reduce the impact on our countryside, the entire section of pylons outside the AONB would need to be under-grounded, or better still, run undersea via a ‘bootstrap’ connection – such as are already in use off the coast of East Anglia, and around the UK.

“I have consistently advocated undersea electricity transmission bootstraps, carrying the green energy produced on our shore to the population centres in London and the South East, and the East Anglia GREEN proposals demonstrate how necessary it is to improve the way we transmit energy across the country.”

Now, Green councillors in Suffolk have said that an undersea electric grid should be considered as an alternative – linking Sizewell and offshore wind farms with London.

Rachel Smith-Lyte, Green councillor for Melton at East Suffolk Council, said: “With more wind farms and a continuing need to install additional capacity off East Anglia, what is missing is a strategic approach by Government to link them all together.

“We know that putting cables under the sea is more expensive than pylons, but this is no surprise when every energy company is constructing a separate landfall and its own grid connections on land.

“If you put a grid under the sea and get companies to co-operate then costs will be very significantly reduced. The key is for Government to intervene in order to make sure this happens.”

Andrew Stringer, Green, Liberal Democrat and Independent group leader at Suffolk County Council and Mid Suffolk district member, said he had worked on the idea with the late Lord Michael Blakenham, a Bramford Independent district councillor who put forward the idea back in 2012.

“At 45-50-metres high, if these proposed pylons go ahead they will have a massive impact on our rural landscapes and community green spaces,” Mr Stringer said.

“In particular the setting of many listed buildings would be greatly diminished.  Given that this alternative grid solution would meet our increasing need for green electricity cables with far less impact, it really does merit further serious consideration.”

National Grid launched a consultation last week on its Norwich to Tilbury plans which runs until June 16, and said consultation responses will be carefully considered.

Another consultation round has been pledged before a formal planning application for the scheme, known as East Anglia GREEN, is lodged in late 2024.

National Grid said: “The reinforcement is needed to carry more renewable and low carbon power from offshore wind and interconnectors (subsea electricity cables to share electricity between the UK and Europe).

“The new reinforcement is expected to be around 180km in length and made up mostly of new pylons, with some underground cables where the route crosses an area designated for its outstanding natural beauty.

“A new substation is also proposed on the Tendring Peninsula to connect two new offshore wind farms to the electricity network.”

According to National Grid, the existing network was developed in the 1960s and to date has been able to meet demand.

But increased renewable and low carbon power by 2030 means demand on the network will increase significantly and the existing power lines do not have the capacity to meet demand without reinforcement.

To find out more and take part in the consultation, visit www.nationalgrid.com/electricity-transmission/network-and-infrastructur…