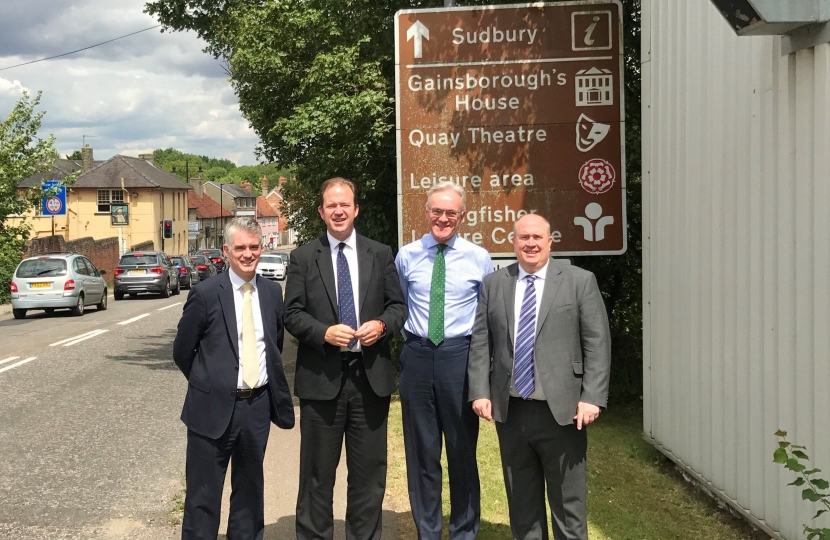 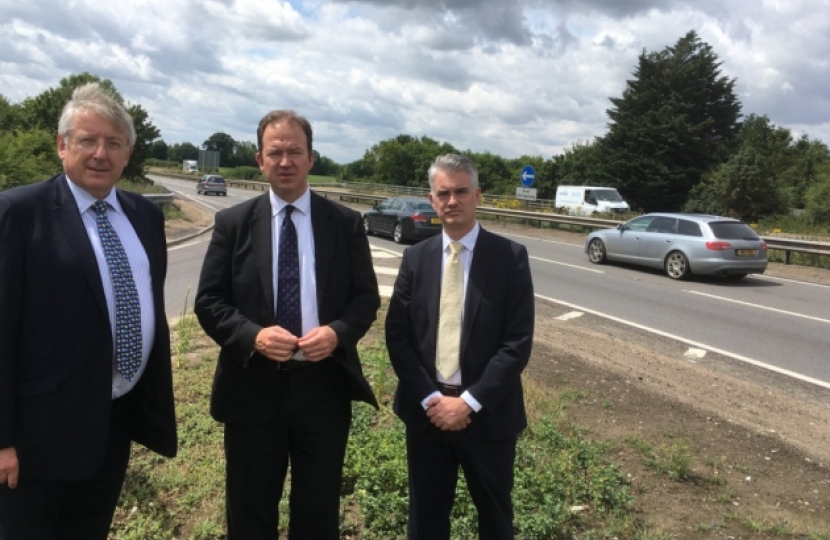 Roads minister Jesse Norman was shown the need for two major projects in Suffolk during a quick tour of two of the county’s most significant blackspots.

He was taken by South Suffolk MP James Cartlidge to see the accident blackspot Four Sisters’ junction on the A12 at East Bergholt – and then taken to Sudbury to see the need for a new bypass for the town.

At the Four Sisters he was shown the danger caused by short slip-roads and the poor visibility on the A12 – and held out hope that the road could be improved in the early 2020s.

Mr Norman said: “Highways England is making major improvements to the A12 between Chelmsford and Colchester over the next few years as part of its RIS1(Route Improvement Strategy).

“It is now looking at proposals for RIS2 (from 2020-25) which may include improvements to the A12 from Colchester north – and this is a junction that may well be included so it is very good to be able to see the problems.”

The projects that Mr Norman saw would need funding from two different sources – improvements to the A12 would come from Highways England while the new Sudbury bypass would have to be built by Suffolk County Council.

Mr Cartlidge is hopeful that some of the money from a new fund for locally-built roads could go towards a western bypass for Sudbury, which has been on the cards for nearly two decades and is likely to cost around £40million.

Mr Norman said: “For years there has been a local campaign to take traffic out of the town centre – arguing that a bypass could reduce the number of lorries driving through the town by 60%, cut congestion, improve air quality and so make lives better for residents.

“I and my officials look forward to seeing the business case for this project. Our task is to ensure that every project we fund is affordable, and every pound of investment delivers excellent value for money for the taxpayer.”

Mr Cartlidge said: “I was delighted that the Roads Minister, Jesse Norman, was able to visit South Suffolk today and spend quality time face to face with two of our most pressing transport issues.

“It was clear that the Minister was very struck by the inadequate nature of the Four Sisters junction near East Bergholt, and we were able to show him how that type of design was typical of a cluster of junctions on the South Suffolk stretch of the A12.

“As we drove around Sudbury’s one way system, and particularly when we found our car awaiting several lorries to pass each other on Cross St, he also got a real up close and personal understanding of why there is such demand for a bypass. This type of ‘coal face’ experience is so important for conveying the concerns of constituents, in a way that a speech in Parliament or presentation to officials can never match”.