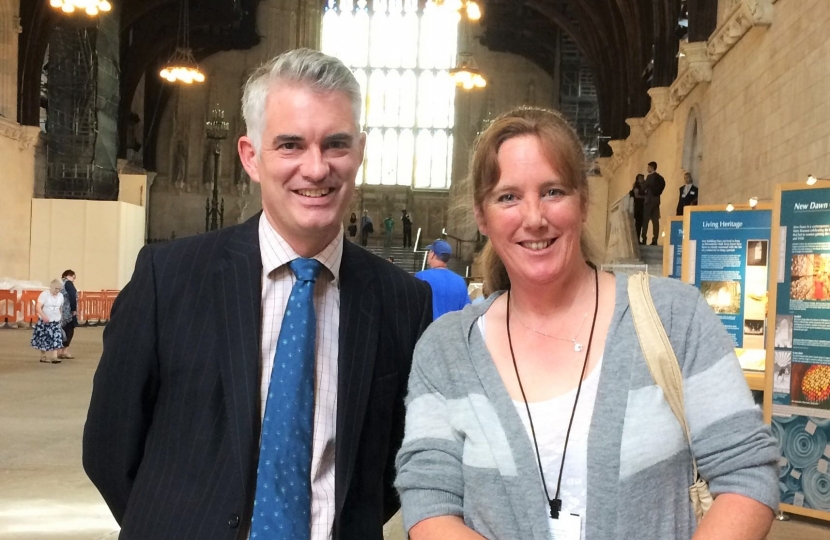 South Suffolk MP James Cartlidge has voiced his support in the Houses of Parliament last week for a campaign to help safeguard horses and riders.

During a debate on the safety of riders and horses on rural roads, Mr Cartlidge thanked Hadleigh resident and horse rider Christine Brindle, whom he met at her stables last July and who also attended the debate, for helping raise awareness for the Pass Wide and Slow campaign, promoting respect for equestrian road users.

He raised the question of whether changes to the law could help enforce the idea, but also suggested a nationwide public messaging effort should be taken up, inspired by the ongoing ‘THINK! bike’ campaign. “A particular concern is about anticipation, because my constituency, like many others, has bendy rural roads, and drivers have to anticipate more what is ahead of them,” he said.

“If they come sharply around a bend and there is someone with a horse, they have to react far more quickly.

“I have a predominantly rural constituency. We live in an age when people in the countryside sometimes feel ignored.

“On this issue, we could show that we have a transport policy for the whole country that takes into account and is fair to all users, in particular those on horseback and those riding with horses.”

Mr Cartlidge also said driverless cars would have to be factored into this issue in future, due to problems these vehicles have in other countries dealing with animals.

Published by the Suffolk Free Press