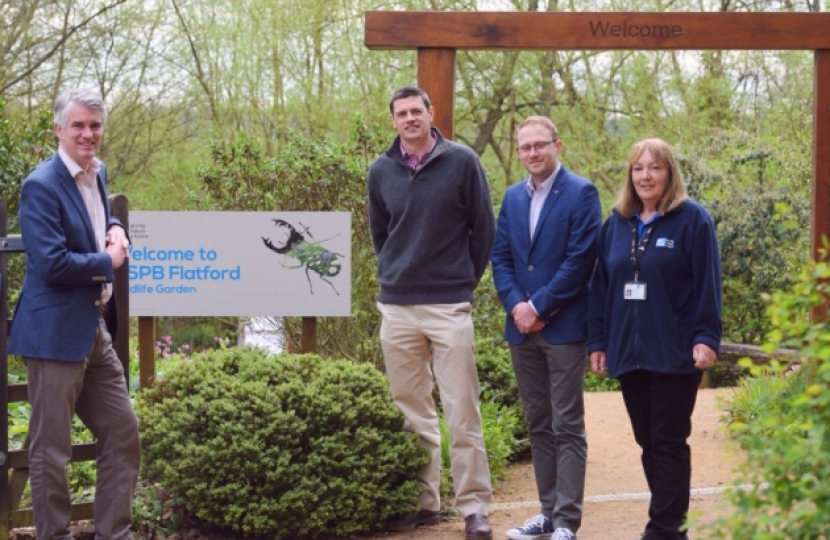 South Suffolk MP James Cartlidge emphasised the “huge importance” of people having a connection with nature as he toured a wildlife garden that has become one of East Anglia’s most innovative environmental projects.

He visited the RSPB’s Flatford Wildlife Garden in his constituency - a site at which since 2011 the charity has shown visitors how gardens can benefit nature and people.

He said: “It is hugely important that individuals of all ages spend time exploring the natural world.”

South Suffolk residents were “very fortunate” to be surrounded by an abundance of nature to “investigate and appreciate.” The RSPB had developed the wildlife garden at Flatford “with the aim of encouraging younger people to get involved in supporting vital local habitats.”

The RSPB says it hopes the garden can help address a “nature deficit” - the blight on people’s lives caused by their lack of connection with nature. The deficit especially affected children and young people and yet the evidence of the health and wellbeing benefits that are derived from spending time in the natural environment was growing, the society said.

RSPB Suffolk area manager Ben McFarland, who accompanied Mr Cartlidge on his visit, said the benefits of nature were becoming widely recognised. However, as pressure on the natural world increased nature increasingly depended on people protecting it.

“Ultimately, we are far more likely to succeed in protecting nature if people understand and appreciate it,” he said. “That’s what Flatford Wildlife Garden is about - we want to inspire people of all ages about nature and what we can all do to help save it.”

Mr Cartlidge also visited the National Trust’s Flatford Mill and Bridge Cottage. The trust is developing a project at the cottage which brings to life the social history of Flatford.

The £25,000 Echoes That Remain project, backed by a £10,000 Heritage Lottery Fund grant, tells the stories of families who once lived and worked in Flatford. It features Bridge Cottage being “re-presented” as it was when it was the home of the Clarke family who lived there in the 1880s.

Flatford, in addition to its rural character depicted by artist John Constable, was also once an industrial centre. The project is exploring the area’s agricultural and industrial heritage.