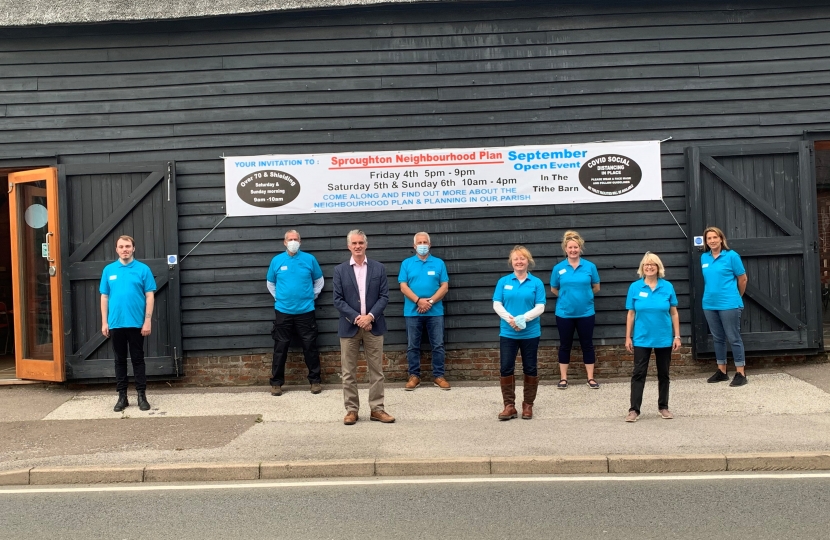 Vital efforts are being made to protect Sproughton from unsuitable development, according to village leaders.

Sproughton Parish Council held a public exhibition over the weekend to gather the views of residents.

It comes as the parish is among several in the Gipping Valley, along with Bramford and Claydon, to face bids for large housing developments.

Sproughton Parish Council chairwoman Helen Davies said: “What came out very clearly is that people want the village itself to remain a village.

“They don’t mind being reasonably close to Ipswich because that’s quite handy, but they like the small rural nature of the parish overall.

“People are accepting of some development but they don’t want to be swamped.”

Those developing the neighbourhood plan – a document which effectively outlines areas considered suitable and unsuitable for development as well as infrastructure improvements needed – have raised fears that the small space of green land separating Sproughton and Bramford could be lost if developers continued coming forward with applications in the numbers they have been.

Rhona Jermyn who chairs the neighbourhood plan committee said: “People love the village community aspect to it, and the closeness of Ipswich, but we want to remain individual – not only from Ipswich but Bramford too.

“Everybody loves Sproughton and love the community feel, the characteristics of the parish.

“It’s all those lovely things like the countryside, the village walks, the historic landscape and the community feel.”

Ms Davies added: “It’s also the type of homes being provided – affordable homes came forward strongly as something needed, as did smaller homes so people can downsize or kids from families can get homes.

“There are 650 homes in the parish at the moment and Babergh is predicting 1,650 additional dwellings, so it’s over double.

“It does just show the whole of the parish could be completely swamped by the development so people are naturally concerned because they feel like they have no control.

“That is where the neighbourhood plan comes in because it will give the community direct power to develop a shared vision for the growth in the local area.”

Neighbourhood plans must be considered by planning committees when deciding on an application, and carry increasing weight in decision making as they develop, although a government white paper considering the future of planning could limit their impact.

While Sproughton is still in the information gathering stage, it will use the feedback gathered from the exhibition last weekend in developing suitable sites going forward.

Estimates last year based on developments coming forward suggested the village could nearly quadruple in size of all were approved.

South Suffolk MP James Cartlidge praised the village’s efforts so far, and said: “I know that the impact of future housing development is a major issue for communities in South Suffolk, and I have consistently urged local parishes to prepare a neighbourhood plan so that their voice is heard.

“Of course, this process has been made harder by coronavirus and so I was delighted to meet the Sproughton neighbourhood planning team on Friday, who are continuing to make progress. “Development continues to come forward and there is continued pressure to deliver more homes. If communities want a say where that housing goes, they should engage in the process as much as possible.”