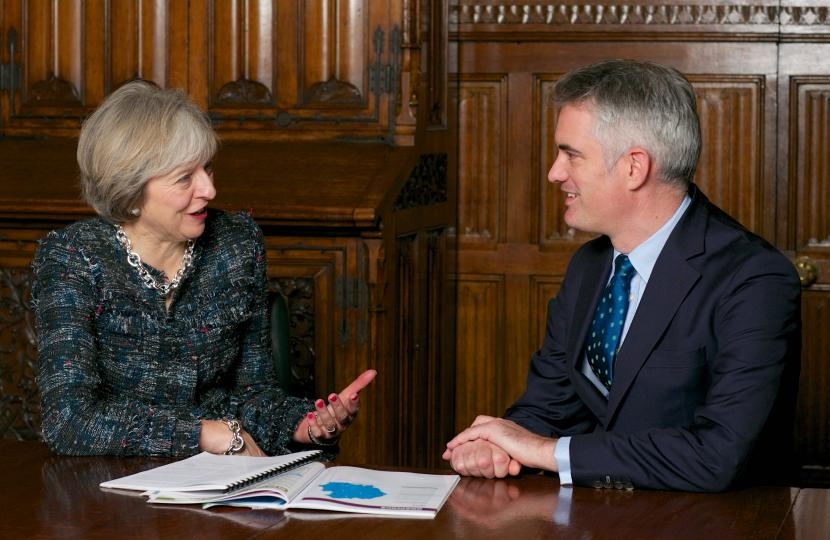 Suffolk’s MPs have backed Theresa May to remain in Downing Street despite talk of a backbench plot to challenge her leadership of the Conservative Party.

And similar loyalty has come from MPs in Essex.

South Suffolk MP James Cartlidge summed up the views of many of his colleagues by saying that a challenge would not be in the national interest.

He said: “We are at a very important point of the Brexit negotiations. We should concentrate on that. A change of leadership now would entire wrong – this really is just Westminster tittle tattle.”

Central Suffolk and North Ipswich MP Dr Dan Poulter agreed: “The Brexit negotiations are really now just getting started and we have to get on with these. The Prime Minister must be allowed to get on with that.

“If we had a leadership fight, that would take three months. You’d then need another three months to get the new team up to speed and given that the negotiations have to be concluded by the end of next year you’d only have nine months for talks. That would be bad news for everyone.”

Bury St Edmunds MP Jo Churchill said the Prime Minister should be allowed to get on with running the country without the distraction of a leadership challenge.

Waveney MP Peter Aldous said there was no appetite for a Tory leadership fight in his constituency: “She increased the Conservative vote in this year’s general election and people just want her to get on with the work of seeing us through Brexit.”

West Suffolk MP Matt Hancock dismissed talk of a plot: “I am totally behind the Prime Minister. I do not think there is any real challenge to her. There is an important job to be done and she is getting on with it.”

Clacton MP Giles Watling knew nothing about the alleged plot until he heard Mr Shapps interviewed on the radio.

He said: “Give her a break! This has all happened because of the problems with her speech. I come from the theatre and if actors struggle through like that they are applauded. I don’t know any of my cohort (2017 intake) who wants her to stand down.”

Braintree MP James Cleverly tweeted his support for the Prime Minister: “I’ve always liked @grantshapps but he really is doing himself, the party, and (most importantly) the country no favours at all. Just stop”.

And Suffolk Coastal MP and Environment Minister Dr Therese Coffey sent a terse reply to the plotters during a ministerial visit: “It’s complete rubbish. I’m 100% behind the PM.”

Talk of a challenge to Theresa May’s leadership of the Conservative Party has been in the air since the General Election which saw its majority wiped out – and left the Tories relying on Ulster’s Democratic Unionists to keep them in power.

But the talk of a challenge erupted again after this week’s party conference which saw Foreign Secretary Boris Johnson appearing to make a move to attract party support – and then the Prime Minister’s disastrous speech on Wednesday morning.

On Friday morning the plotting became more serious as two former minsters, Grant Shapps and Ed Vaizey, indicated they would like to see a leadership contest.

However Theresa May has brushed aside calls from rebel Tory MPs to stand aside, insisting that she would carry on providing “calm leadership” at the head of the Government.

In her first public appearance since her chaotic party conference speech in Manchester on Wednesday, the Prime Minister said she had the “full support” of her Cabinet.

Earlier, loyalist MPs claimed a backbench plot to oust her from Number 10 was set to “fizzle out”.

Charles Walker, vice chairman of the powerful Conservative 1922 Committee, said the attempt to force a leadership contest lacked credibility and was doomed to fail.

Mr Shapps, who has claimed to have the backing of around 30 MPs – with some Cabinet members also privately offering support – said the demands for an election were growing. However no other names of potential rebels emerged during the day of rising speculation.

Arriving for a charity coffee morning in her Maidenhead constituency, the Prime Minister was determined to present an image of business as normal.

“Now what the country needs is calm leadership, and that’s what I am providing with the full support of my Cabinet,” she said.

After Mr Shapps was named by the Times as the leader of a group of around 30 Tory MPs planning to send a delegation to Mrs May to tell her she must go, he accused the party whips of leaking his name in an attempt to “smoke out” the rebels.

But those loyal to the Prime Minister said it was clear that the rebels lacked the 48 MPs they needed to force a contest under the party rules, and questioned whether they could even muster as many as 30.

Tory plots can succeed – but can be dangerous if they don’t hit target!

Conservative plots to unseat leaders can succeed – but can end a political career if they fall flat.

Mrs Thatcher’s premiership came to an end in 1990 after she lost both Chancellor Nigel Lawson and Deputy PM Sir Geoffrey Howe in a few months.

This eventually led to a challenge by Michael Heseltine who missed out on the top job but did bring her down paving the way for John Major’s premiership.

In 1995 Mr Major, coming under fire from rebels, issued a “put up or shut-up” call which saw his leadership challenged by John Redwood. His campaign failed. Mr Major remained in office – and Mr Redwood never held ministerial office again.

In 2003 a lacklustre conference speech convinced Tory MPs that Iain Duncan Smith could not lead the party out of opposition at the next general election and he was replaced by Michael Howard a few weeks later in a bloodless coup. The Tories still lost in 2005.