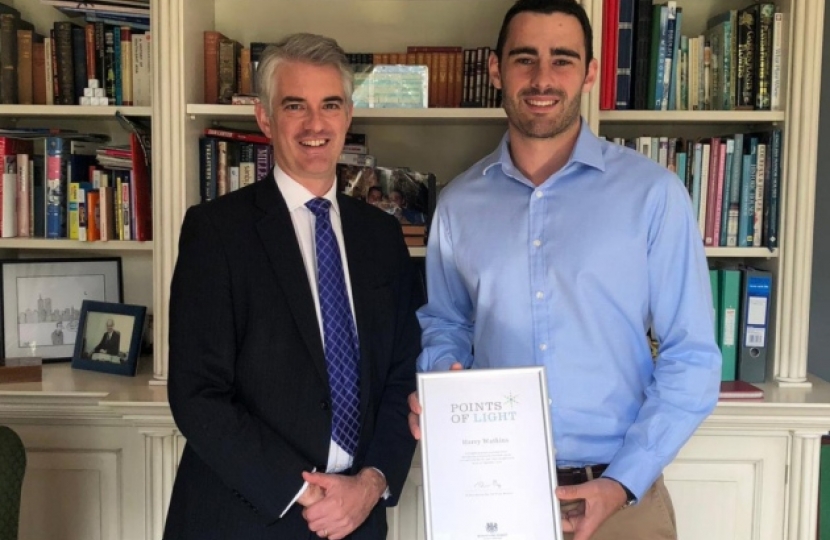 A Suffolk man has received a prestigious award from the prime minister for championing mental health awareness following the death of his twin brother.

Harry Watkins, from Higham on the Suffolk/Essex border, launched an online mental health support service at the University of Essex after his twin brother Charlie took his own life in March last year aged 22.

The online service – called ‘Chat with Charlie – gives students the opportunity to start a conversation about their mental wellbeing in a safe and anonymous environment.

Harry set up the Charlie Watkins Foundation to carry out his work and has collaborated with the university and mental health charity MIND, raising £25,000 to fund the project.

Harry received a Points of Light award from the Government on September 10 – to coincide with the World Health Organisation’s Suicide Prevention Day – along with a personal letter from Prime Minister Theresa May.

Harry said: “I am extremely honoured to be receiving such an important award. I am hugely grateful for the recognition of work I have done with the ‘Charlie Watkins Foundation’.

“It is our aim at the ‘Charlie Watkins Foundation’ to support younger people who are suffering with mental health and to make sure nobody is suffering in silence.”In her personal letter to Harry, the prime minister said: “The foundation you have set up in memory of your brother Charlie is doing incredibly important work to increase awareness of mental health in young people.

“Too often the stigma that can surround conversations about mental health stops people from reaching out to get the support they need.

“The ‘Chat with Charlie’ service you have launched will give more young people the confidence to take that first step to getting the help they need.

“It is a fantastic to tribute to Charlie and you should be very proud of everything you have achieved.”

James Cartlidge, MP for South Suffolk, said: “I was so pleased to hear this news because it’s incredibly well deserved.

“As a father of twin boys I cannot imagine the grief this loss must have caused Harry and his family, and it is a testament to his character that he then used that traumatic experience to set up a charity to avoid others falling into the same situation.”