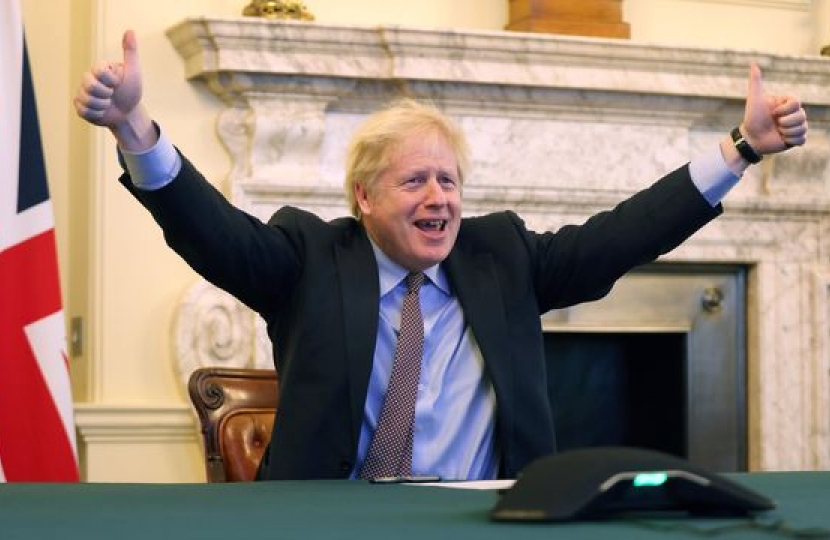 Boris Johnson gives the thumbs-up after the news about the EU-UK deal was announced. - Credit: Pippa Fowles

Suffolk's Conservatives were quick to welcome the deal between the UK and the EU after it was formally announced during the afternoon of Christmas Eve.

Work and Pensions secretary Therese Coffey, who represents Suffolk Coastal, tweeted: "Great news that UK and EU have agreed a mega free trade deal. Looking forward to Parliament voting it through before the end of the year." Accompanied by a picture issued by 10 Downing Street of Boris Johnson doing a thumbs-up in the cabinet room.

The same picture was used by Ipswich MP Tom Hunt and South Suffolk's James Cartlidge to accompany their welcomes for the deal.

Mr Hunt expected the overwhelming majority of Conservative MPs to back the deal: "I shall be looking carefully at what is proposed, but I think there is a mood that this is as good as we could expect - and there is a feeling in the country that people want to get this all done.

"I am sure some purists will not be completely happy - but you were never going to get a deal that kept everyone happy and I think the Prime Minister and Lord Frost have done better than most people expected. They deserve a lot of credit."

Mr Cartlidge tweeted: "Delighted we have achieved a deal - a free trade agreement with the EU. In principle, whilst of course we all look forward to the details, it is in our national interest to leave on orderly & mutually agreed terms. Congratulations to the PM, Lord Frost & our negotiating team!"

And Bury St Edmunds MP Jo Churchill said: “I welcome the deal, which I have long advocated for. The deal delivers for Britain, whilst maintaining a close and positive relationship with our European neighbours. I look forward to studying the deal in more detail over the coming days."

However not everyone was happy. Former Labour MEP for the East of England Alex Mayer said: "This is another example of Boris Johnson over promising and under delivering.

"This deal is a miserable failure after four long years of Conservative negotiations. It is better than the alternative of no deal at all – but securing the lesser of two evils is no cause for hope.

"This is the first trade deal in history with the express plan of making it harder to trade. It does not deliver a deal on services, which make up 80% of our economy, so will limit access for East Anglian businesses to vital EU markets.”