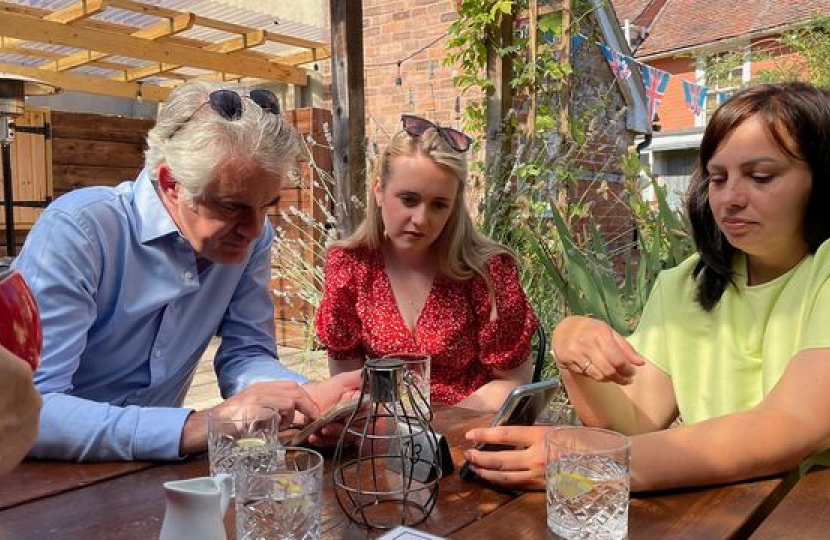 The South Suffolk MP has met with Ukrainian refugees to discuss the assistance provided by a local refugee support group and ongoing issues with employment and transport.

Co-founder of HHU Shauna Bilson detailed the services they offer: "We have anything from trauma specialists to qualified English teachers, health experts, translators and people who can help with transport and form filling."

Hadleigh Rotary Club has also helped with bikes, phones and equipment for English lessons and the organisation has benefitted from the fundraising efforts of community member Sarah Thompson who has been selling Ukrainian badges and tea towels.

With more than 50 Ukrainians now living in or near Hadleigh, a major issue has arisen surrounding finding them suitable employment and transport.

Mr Cartlidge met with three generations of refugees: Olena, her mother Iryna and her daughter Sofiia who arrived in Hadleigh on June 21.

The HHU is providing English lessons to Olena's family to help them settle in and Iryna is growing produce at an allotment donated to them with equipment from a Layham events group.

Olena has now found work at the Flying Guardsman bistro, but told Mr Cartlidge that many Ukrainians were still looking for work in the town and, with more families due to arrive, the demand for jobs was increasing.

Mr Cartlidge acknowledged these problems and said he is working on a plan for matching job vacancies to Ukrainians while also looking into solutions for alleviating transport issues.

HHU co-founder Cyndy is hosting Olena's family and spoke on the daunting prospect of providing the right environment for refugees being eased by community support: "All I had was the space to host. No expertise in what was needed and no idea of how to help them settle into UK life.

"Most have left their men behind, as well as their homes, so there is continued stress.

"Being able to talk with other hosts via online messaging is really useful and the Ukrainians have built up a very active and supportive community through their WhatsApp group."

The Hadleigh Hosts Ukrainians group offer continuous support to those hosting, or planning to host, refugees and encourages those from the town and surrounding areas to get in touch via their Facebook page.