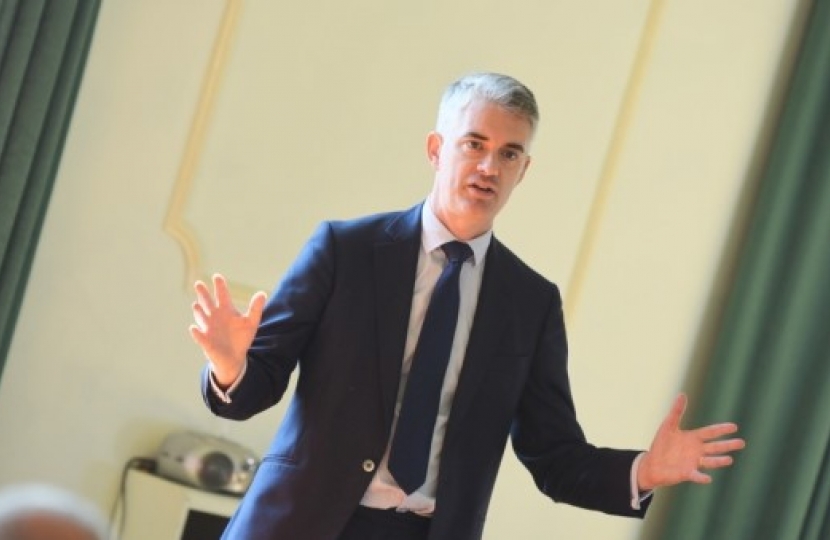 On Friday morning I chaired a session of the South Suffolk Taskforce in Sudbury Town Hall on the Sudbury Delphi site which is scheduled to close in 2020. Alongside Taskforce members from the New Anglia LEP, Babergh District Council and Sudbury Town Council, I questioned representatives from Delphi management and Unite the Union. The meeting was an opportunity for the Taskforce to receive an update from Delphi about their current plans and to hear about the experience of the workers who are still employed on the site.

At the meeting the Taskforce agreed to commission a new 'Options Appraisal' report into future use of the site. The report would be likely to be partly funded both by Babergh and Delphi, and consider credible future uses of the site, in addition to the physical and workforce assets. It will look at all possible configurations to understand what could practically be achieved at the site. Agreement was reached that the least desirable option would be to allow the site to fall into a derelict state and a blot on the surrounding area. On the other hand, there was unanimity among all stakeholders - employer and Unions; LEP, District and Town Council representatives - that by far the most desirable option would be for the site to to be taken on for continued industrial use with the greatest possible retention of existing staff. All stakeholders agreed that this outcome was critical given the relatively unique availability of highly skilled, well-paid jobs at Delphi within local distance to most of its workers.

Reporting to stakeholders and Delphi/Unite about developments at a UK Government level, I confirmed that since the early days of the announced closure, conversations have been ongoing between Delphi's US corporate leadership and UK Ministers and officials, but in particular, within Whitehall to seek interest from known and established players who could credibly consider taking on the plant 'lock, stock and barrel' - including its existing staff. I confirmed that commercial confidentiality means that not all such conversations can be publicly divulged, but that workers at the plant could be assured that all avenues open for potential buyers were being pursued. It was agreed at the meeting that this process would be enhanced as soon as possible with the LEP drafting a summary document promoting the Delphi plant opportunity to be promoted in UK embassies around the world, to further stimulate potential interest from inward investors.

A highlight from Delphi evidence was the confirmation that there have been just two compulsory redundancies to date. As far as evidence from Unite was concerned, particular emphasis was placed on the fact that a tipping point will be reached in the coming months where the best quality engineers and longest-serving workers - currently retained on the plan for the time being - start to peel off in search of alternative opportunities.

I have no doubt that the principal asset of the Sudbury site is its workforce. It is rare for an inward investor to face the prospect of buying not only a plant but an existing and highly skilled workforce, drawn from the local area with a demonstrable track record of loyalty and the maximum standard of engineering excellence. We are therefore doing everything we can as stakeholders to progress the possibility of the plant being taken over as a continued industrial entity with renewed employment for its workforce.