The Voice of the Turtle Dove 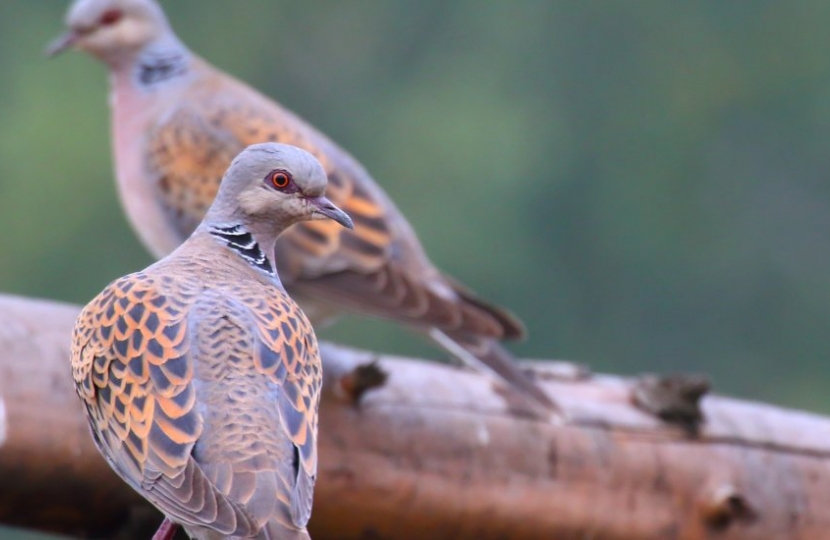 “The winter is past, the rain is over and gone. The flowers appear on the earth; the time of singing has come, and the voice of the turtle-dove is heard in our land.”

– The Song of Solomon

In May, around 18 million UK viewers (and many more overseas) tuned in to watch Prince Harry wed Meghan Markle, and will have heard the quote above read aloud in St George’s Chapel. Sadly only a tiny proportion of those watching will hear the distinctive purring voice of the turtle dove this year, as numbers of these summer visitors in the UK have plummeted by 94% since 1995. In response to this dramatic decline, Operation Turtle Dove, a partnership between Natural England, Pensthorpe Conservation Trust and the UK’s BirdLife International partner, the RSPB, is working to prevent the loss of the dainty dove from the British countryside.

Because this is a farmland bird sensitive to changes in land management, farmers play a crucial role in its recovery. So efforts are focused on advising and supporting farmers in the bird’s remaining strongholds in Eastern and Southern England.

Research has shown that the biggest problem for the doves during the breeding season here is a lack of food. One solution rolled out on a number of farms is the deliberate planting of arable wildflowers in “turtle dove strips”, so that seed of plants like fumitory, chickweed, medicks and vetches is available when the birds are nesting and rearing chicks. The Operation Turtle Dove team advises farmers on accessing funding through the Countryside Stewardship scheme, enabling them to provide this.

However the rate of decline of turtle doves is now of such concern that further steps are being taken to boost their chances of nesting success. This year, for the first time, the team have been distributing supplementary feed, consisting of wheat, oil seed rape, millet, canary seed and sunflower hearts, to farmer and landowners across the two turtle dove hotspot regions. So far, this has been supplied to over 120 sites, and in many of these the turtle doves are taking advantage of the extra support.

The UK’s turtle dove friendly farmers are passionate about the birds and do not want to lose them, with many becoming real champions for the cause. One in Kent hosted a one day workshop for 20 other farmers, getting them on board with providing food and suitable habitat. In Norfolk’s Wensum Valley, a group of farmers has joined with Pensthorpe Conservation Trust to provide nesting habitat, ponds and food for turtle doves in an area covering 5,500 hectares of connected farmland. As well as farmer champions there may even now be a possible champion in the House of Commons too: the Member of Parliament for South Suffolk, James Cartlidge. James is the latest MP to sign up to the Species Champion project, which partners politicians with conservation organisations to support threatened wildlife.

The turtle dove is in serious trouble. But if the enthusiasm of those already supporting this bird continues to grow, with the right financial support in place for farmers, there’s a chance the voice of the turtle dove will continue to be heard in our land.