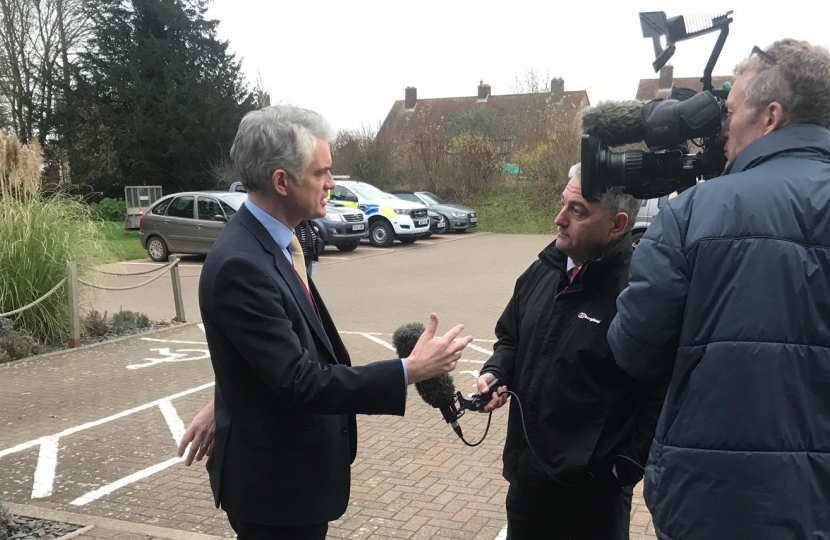 I have received a huge number of emails and other communications on the subject of Brexit, and although I cannot conceivably cover every point raised, I will try to set out my position as far as possible.

Many South Suffolk residents have written to me requesting I support a second referendum. I realise that some of you feel that ‘facts have changed’ since the original vote, but on that basis one would never allow a general election result to stand as someone would always challenge the promises made. There can be only one arbiter if we want to avoid a situation where the judiciary trumps democracy, and that is the clearly expressed view of the electorate. Some have also questioned issues around ‘Russian’ influence etc. I can honestly say that in the home and away referendum debates I held for remain against my colleague Bernard Jenkin, advocating leave, I doubt a single person on either occasion was the slightest bit affected by ‘fake news’ facebook adverts etc. I promised to accept the referendum result having voted it into law, to finally settle our direction once and for all, and I stand by that promise. We have held a ‘people’s vote’ and it was to leave; I am convinced a repeat would provide the same response and it is shocking to see so many informed observers thinking they can assume how the British public would cast their ballot.

Of course, the vote was only to leave or remain, with millions of people voting for a myriad of different reasons that none of us can ever know. All we can say for definite is what was promised in the prospectuses. The ‘official vote leave’ manifesto promised to negotiate: ‘a new UK EU treaty based on free trade and friendly co-operation’. It also said that ‘taking back control is a careful change, not a sudden step’. Furthermore, the general election manifesto on which I was privileged to receive over 60% of the vote in 2017 promised to negotiate ‘a deep and special partnership’. There was no mention of WTO rules or ‘no deal’ in the referendum campaign, just promises of how ‘easy’ it would be to negotiate a deal because of the influence of German car-markers and others. That said, we also said that ‘no deal is better than a bad deal’ but I happen to believe that the deal we have before us today is a very good deal, once you take account of all the conflicting and complex factors behind its underlying logic. Whereas, I believe that just as a second referendum would undermine democracy, the WTO option is truly a bad deal as it would undermine our economy, returning us within days to a vast panoply of tariffs, associated red tape and non-tariff barriers for British industry and farming day-to-day trade with our nearest neighbours.

The mammoth task of untangling over 40 years of logistical and legal ties to the continent, now embedded every minute of the working day in ‘just in time’ transit of goods in and out of these islands, has proven to be predictably complicated. What we needed – above all else – was to find a way to exit those links whilst securing our base: maintaining the confidence of inward investors; ensuring we respected the Good Friday Agreement which we entered into as a sovereign nation in good faith, without any EU instigation; ensuring the continued smooth flow of goods, food and so on; respecting the rights of EU citizens and the tightness of the result, whilst putting us in a position to deliver on the referendum. We have achieved that. We have a robust and extremely comprehensive withdrawal agreement and transition that enables us to disengage ourselves in a gradual and sensible way.

At the same time, we have agreed a very strong framework, now enhanced by last night’s negotiations, for the long term deal we will need to negotiate once the ‘standstill’ transition expires. This includes:

The legal facts of the backstop as updated overnight are a matter of dispute even among highly specialist lawyers. What we have is a so called ‘insurance policy’ to avoid a hard border on the island of Ireland, so that our obligations entered into freely under the Good Friday Agreement can be maintained. The problem for many of us has been the prospect of this device being used to ‘trap’ us in the EU’s Customs Union.

In my view, it is disappointing that we did not receive absolute improvements on the protocol enabling us to definitively say that we could unilaterally leave. However, the Attorney General’s statement just delivered to the House, and in his subsequent answers, has emphasised that we have ‘reduced the risk’ of being ‘trapped’. It remains as ever a question of judgement and confidence as to what we believe is the probability that we could negotiate an FTA after March 29th. My view is that once we formally leave, especially once you add the new measures requiring ‘pace’ from the EU negotiators’ paranoia (Cox's words) about never leaving would lift and we would proceed in a more technical fashion.

Ultimately, when considering the risk of being stuck in the backstop – a risk that the AG makes clear has now diminished – we have to set it against what risks arise from the proposed deal being defeated. In this situation there are three remaining outcomes.

A general election, with all the instability that could entail; a delay, with all its uncertainty; or ‘no deal’ and WTO terms - which we now know would mean nil tariffs on most imports, and the return of tariffs & all its red tape for British industry.

I will be voting for the deal this evening.