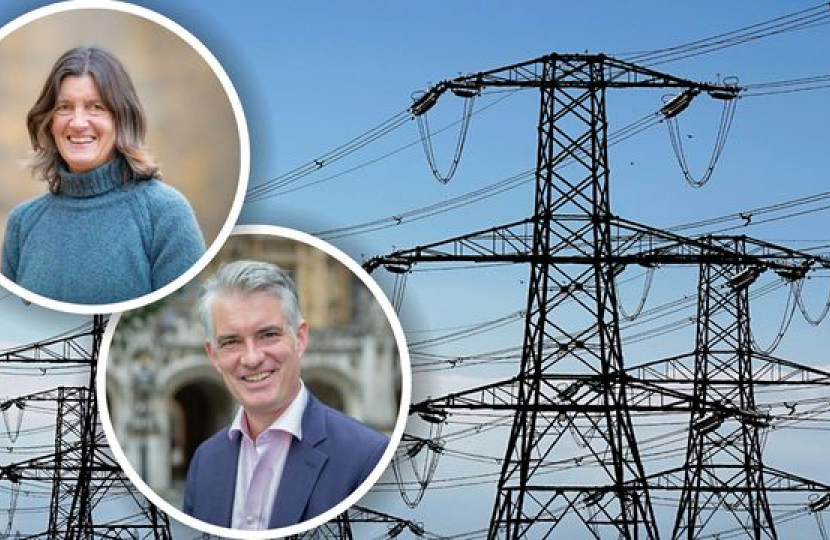 Campaigners and a Suffolk MP have slammed National Grid after the company publicly admitted they "did not consult offshore options" as part of their East Anglian pylon project - Credit: PA/Susan Lang/Office of James Cartlidge MP

Campaigners have slammed National Grid after the company publicly admitted it "did not consult on offshore options" as part of its East Anglian pylon project - despite reportedly saying it would in a private meeting with MPs.

In a letter sent to South Suffolk MP James Cartlidge, National Grid chief executive John Pettigrew claimed the company had been "consistent on this point" and apologised "if this had been misunderstood".

However, Mr Cartlidge claims he was assured by company officials on July 18 that their consultation "definitely covered offshore options" and he would be sent "a detailed document of proof".

The MP chose to subsequently survey those taking part in the consultation, with 99.4% of the 1,040 respondents disagreeing with National Grid's assertion that its survey did cover offshore.

The letter from Mr Pettigrew came as a response to this result.

"I am pleased that National Grid have finally accepted what was clear to everybody else - their East Anglia GREEN consultation did not consult on offshore options," said Mr Cartlidge.

"I note in the letter from CEO John Pettigrew his assertion that NG have been ‘consistent on this point’, but this is simply not the case.

"The fact is it’s only after undertaking that survey that NG accepted the point.

"All we are asking is a fair deal in East Anglia and that must mean full transparency on the cost and implications of offshore alternatives to pylons.

"NG admit they have no detail on this - which prompts the obvious question about how such options were rejected - but I must stress that whilst a detailed examination of offshore options is now needed to restore trust and fairness, this must be open-minded and not conducted by NG."

Under proposals for the ‘East Anglia Green Energy Enablement (GREEN)’ project, a 180-mile route of power lines suspended mostly on new pylons would run through Suffolk and into Essex, past Dedham, Langham and crossing the A12 into Tendring to connect into the site of the East Anglia Connection substation (EAC).

Rosie Pearson, of campaign group Essex Suffolk Norfolk Pylons,said: "We all knew that the offshore consultation wasn't consulted on, so why did National Grid say it had been and why has it taken until now to confirm it publicly?

"Likewise, if the offshore route was considered, why is it taking them so many months to present it to us?

"It's not true that an onshore route is the only possible one with planning frameworks.

"The company ESO's own report in 2020 found that it is better for consumers, communities and the environment to create a coordinated offshore grid."

A spokesman for National Grid said: “As we stated in the letter to James Cartlidge MP, information including onshore and offshore options for the East Anglia GREEN project, was included in our first consultation in April.

"It would have been disingenuous to consult on the offshore option knowing it does not comply with the current frameworks we work within.

"This is a point we have been consistent on throughout the consultation and since it closed.

"Responses from the first consultation will be included in our feedback report which will be available at the next consultation in late Spring 2023.”