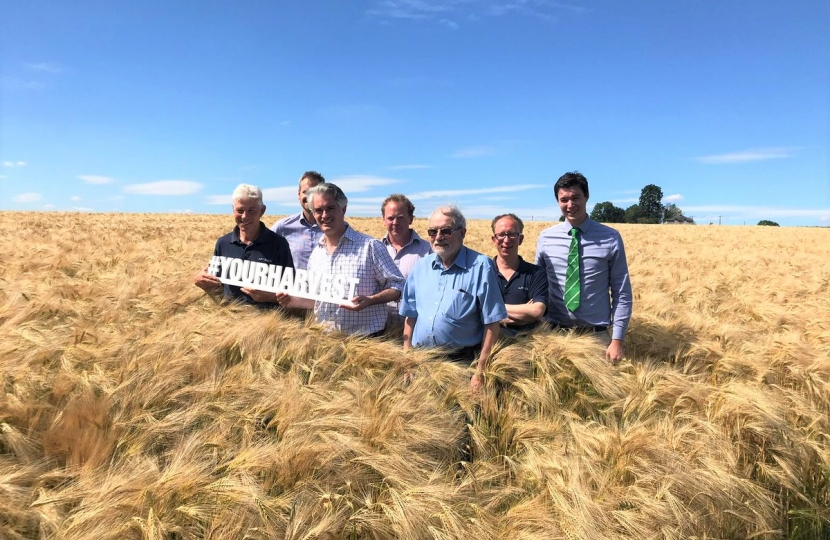 James Cartlidge met farmers to hear about their fears over a no-deal Brexit. Picture; Office of JAMES CARTLIDGE

The plight of Suffolk's arable farmers facing problems from a no-deal Brexit could be raised in a debate in Westminster by James Cartlidge.

The South Suffolk MP is hoping to sponsor a debate in the House of Commons over their fears after meeting a group of farmers at Shimpling in his constituency.

He said the UK government had guaranteed there would be no tariffs on wheat and barley coming into the country after a no-deal Brexit, but British farmer could face high costs if they wanted to export to the EU. His concern comes as the October 31 deadline to leave the EU gets closer - and the possibility of leaving without a deal becomes clearer.

Mr Cartlidge said: "It was great to talk in depth with South Suffolk arable farmers and it's clear that their dominant concern at the moment is the potential impact of tariffs which would be imposed in the event of a 'no deal' Brexit.

"I stressed that my overwhelming preference was to see a negotiated outcome in which free trade was maintained between the UK and the EU.

"However, it is a fact of law that the UK may leave without a deal and all the farmers I spoke to were particularly concerned with the issue of tariffs.

"Without a deal, the UK has confirmed that it would levy zero tariffs on imported wheat and barley to avoid stoking domestic inflation.

"In contrast, because 'most favoured nation' rules would stop the EU from granting us preferential tariffs without a deal in place, they would have to levy the default WTO tariff on our cereal exports which would be almost €100 per tonne, making our exports unmarketable.

"Every single farmer attending the meeting was of the view that if this happened, and we also slashed import tariffs to zero, we could see a fundamental challenge to the viability of arable farming in this country.

"Following the meeting, I will be applying for a Parliamentary debate on arable farming tariffs. It is my view that, whilst we should do everything possible to avoid 'no deal', in such an eventuality the UK Government should grant the same protection to arable farming that it has to dairy and levy reciprocal tariffs.

"Otherwise, the UK Government would effectively be protecting foreign competition from tariffs whilst watching our own farmers suffer a massive hit. That is not acceptable.

Mr Cartlidge has now applied for a parliamentary debate on the impact of UK's proposed no-deal tariffs on arable farming.