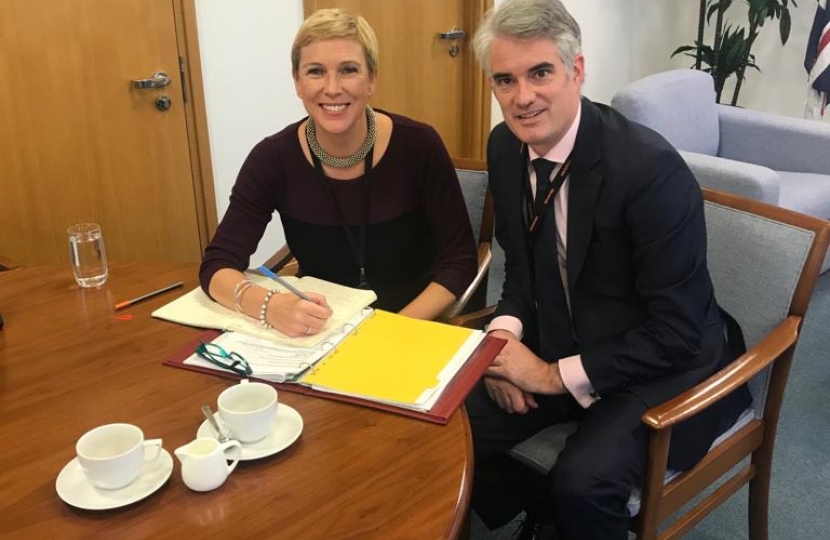 Following an announcement in the middle of January that Chambers Buses were launching a consultation on a major reduction of bus services in villages near Sudbury, Cllr James Finch and local Parish Councils met with Jeremy Cooper, Managing Director at Chambers to raise their concerns. Separately, James Cartlidge MP met with him in the House of Commons to discuss the changes and outline the problems in the company's proposals. It was proposed that a reduced route 84 bus service, which operates between Sudbury and Colchester, passing through Nayland, Stoke-by-Nayland, Leavenheath and Assington, would principally stop on the A134, without going off the road into villages such as Stoke-by-Nayland and Assington. Additionally, Jeremy Cooper of Chambers said that a two-hourly timetable to the villages was no longer financially viable with the present number of customers using the service.

Discussions at both meetings were productive and amendments were offered by Mr Cooper for a trial period from 29th March until the end of the July School Term with a view to increase the number of passengers per bus journey:-

James Finch commented; “By sharing the concerns of all face to face, a greater understanding of each other’s point of view was obtained.  I am pleased that a compromise has been achieved to enable residents of the four villages to get to Colchester and Sudbury at appropriate times.  It is now important that all share this revised slimmed down timetable so that our buses are efficiently used - in particular by those that really need them.  The old adage now really does hold true for this important trial period,  “Use it or Lose it”.

James Cartlidge MP added: “I have had a large number of constituents contact me with their concerns about proposed changes to the 84 bus route. Working with Cllr James Finch, Suffolk County Council’s transport team and Chambers’ buses, we appear to have found a way forward that preserves village stopping services for the time being. Whilst these are more limited than before, given the threat of a complete cessation of such services and the commercial reality faced by the provider, it is welcome that a level of bus connectivity will continue to be available in the most affected villages. However, echoing Cllr Finch, I would emphasise that the new configuration is for a trial period up to the school summer holidays and therefore it really will be a case of villagers using their service or finding we are back at square one without a bus stopping in their villages at all. Of course, I am keenly aware that there is a wider policy challenge here and that other villages in South Suffolk, e.g. Bentley, have lost bus services in recent months.

"I was therefore pleased to hear in the Government’s £5bn infrastructure plans announced on Tuesday that extra funding was promised for bus services in the regions outside London. I will be keen to work with Suffolk County Council and other stakeholders to see what more can be done to access this funding and to find more sustainable transport solutions for our rural communities”.

In conclusion, Chambers have listened to the concerns of the residents, their MP and County Councillor and a revised trial timetable has been provided up until the end of the Summer school term. The group plan to meet again at the end of April to review usage of buses on this route. This trial timetable will be put up by the bus stops and will be widely circulated in the villages. Details will also be found on the Chambers website:-  https://www.chambersbus.co.uk/

A pilot scheme to help support and encourage the use of electric cars is on its way to Sudbury, after a programme of environmentally-friendly initiatives received a major funding boost.