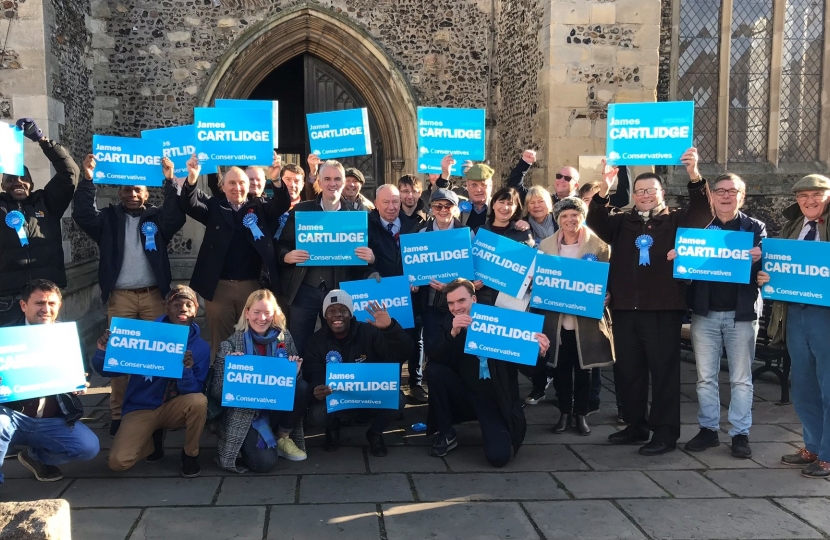 James Cartlidge is seeking re-election as the Conservative candidate for South Suffolk, having served as its Member of Parliament since 2015. He lives in Assington and three of his four children attend Boxford Primary school. Prior to being an MP James ran his own business for over 10 years, steering it through the challenging years of the ‘credit crunch’.

When James was first elected in 2015 a huge issue was digital connectivity with mobile phone ‘not spots’ and slow broadband access dominating constituency correspondence. Although there is more to do, today South Suffolk now has 95% access to superfast broadband, and even a mobile a mast off the A1071 – serving the ‘not spot’ of Boxford - that James was directly responsible for.

More recently James’s time in office has been dominated by the Brexit issue. He has argued consistently since the referendum that as a democracy Britain should respect the majority vote to leave and negotiate a good deal to deliver that result. However, without a majority to pass the PM’s Brexit deal into law an election is now needed to break the deadlock. James is confident that if the PM can secure a majority in the election, we can finally pass a deal into the law of the land and then move on as a country from paralysing uncertainty. The Government will then be able to focus more of its attention on the things that really matter: the NHS; fighting crime; giving Suffolk a fairer share of school funding.

James Cartlidge has been re-elected for South Suffolk after securing a 22,897 majority over Labour.

One week from today, voters in South Suffolk will go to the polls to choose their Member of Parliament, in the UK’s third general election since 2015.

I am delighted to be the Conservative candidate for South Suffolk and I launched my positive campaign on Market Hill in Sudbury on Saturday 9th November. I am looking forward to speaking to residents as we campaign across the constituency's towns and villages in the coming weeks.