A Sudbury couple stranded in India for more than a month after contracting coronavirus abroad are finally expected to return to the UK on Thursday. 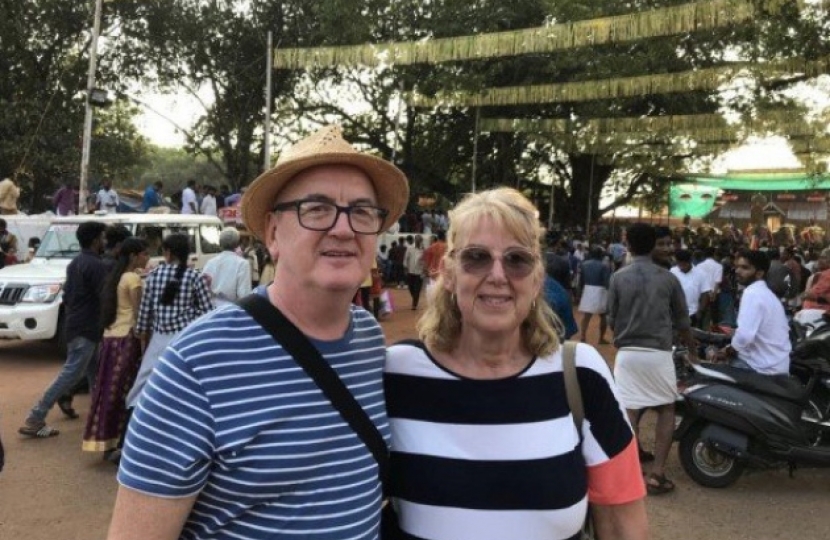 A Sudbury couple stranded in India for more than a month after contracting coronavirus abroad are finally expected to return to the UK on Thursday.

Steven Hancock, 60, and 61-year-old partner, Ann Williams, were part of a 19-strong party visiting Kerala when one of the party tested positive for Covid-19 and forced the group into quarantine in early March.

Ms Williams then tested positive, but a week after family members raised their plight with the EADT the couple were moved to a private healthcare facility thanks to lobbying by the tour operator, Mercury Travel, the Foreign and Commonwealth Office (FCO) and South Suffolk MP James Cartlidge.

They are due to touch down on UK soil on Thursday morning.

Mr Roach said: “We are so relieved. We were worried that flights weren’t going to be as plentiful as necessary but they have managed to get out on the first flight out.”

Since both testing negative, the couple have been in a hotel in Kerala, where the Indian government said they should remain for 14 days before returning home. However, the FCO has secured them permission to return home before those 14 days are up.

Family members of the couple said communication had been limited from the FCO initially, but improved following an intervention by Mr Cartlidge and the media.

Mr Roach also praised the efforts of Mercury Travel chiefs who offered to pay for private healthcare and had been liaising with the FCO.

He added that their point of contact at the FCO had been “doing the best she could but we have all had our eyes opened about how limited their resources and influence are”.

Mr Cartlidge said: “I am delighted that Steven and Ann are confirmed on the charter flight arriving in the UK on Thursday morning.

“My team and I have been in regular contact with their families in the UK, the travel company and the Foreign Office.

“I discussed their case at length with the Foreign Secretary and the Minister responsible for South Asia, Lord Ahmed, and requested that due to their previous hospitalisation, the couple were given priority on any charter flights scheduled from Kerala.

“We have been dealing with constituents stuck around the world and have recently seen a good number successfully returned to the UK.

“I am pleased that this progress is underway but appreciate that there will still be others who need help returning. I would encourage them, or their families, to get in touch with me directly on james.cartlidge.mp@parliament.uk.

“In the meantime, the case of Steven and Ann was particularly concerning and I am very pleased to have received the great news that they will be on their way home soon.”

A pilot scheme to help support and encourage the use of electric cars is on its way to Sudbury, after a programme of environmentally-friendly initiatives received a major funding boost.