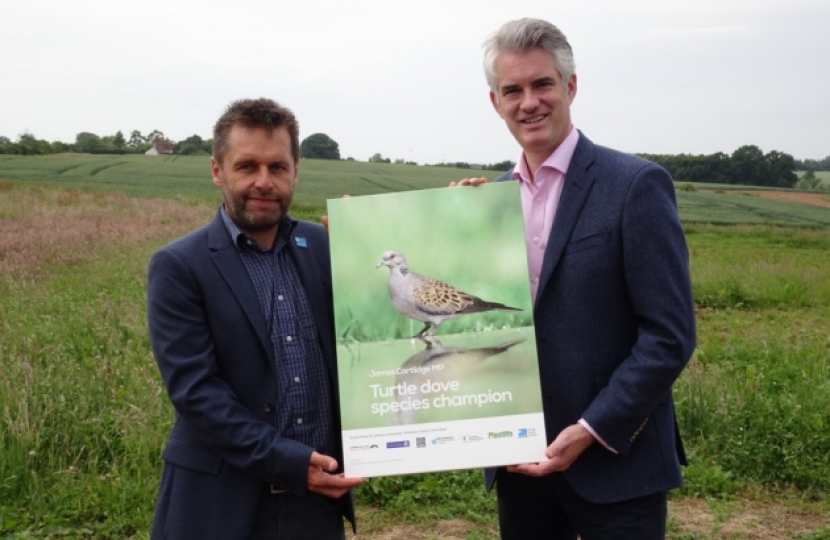 The Species Champions Project partners Members of Parliament with nature conservation organisations to bring political support to the protection and promotion of threatened wildlife. Each MP becomes a ‘Species Champion’, adopting their own species.

Turtle doves, listed as ‘Vulnerable’ on the global IUCN Red List of Threatened Species, are the UK’s and Europe’s only migratory dove. They are highly reliant on the availability of food and nesting habitat in the farmed landscape. In their summer breeding grounds they feed almost exclusively on the seeds of arable plants, nesting in thick dense hedgerows and scrub close to food and fresh drinking water sources such as shallow-banked ponds.

Numbers of turtle doves breeding in Britain have been plummeting continuously since 1970, and even more worryingly their rate of decline has not slowed as their population has decreased, with UK breeding numbers falling by 94% since 1995.

On Friday, James Cartlidge visited fourth-generation farmer Nick Oliver at his farm near Sudbury in South Suffolk – one of the few remaining strongholds for turtle doves in the UK. Mr Oliver manages parts of his 150 acre farm to provide the migratory doves with the nesting and feeding habitat they desperately need if their numbers are to recover from 50 years of decline.

Nick Oliver: “Traditionally, turtle doves have always been here on the farm. You would see lots of them, including young birds, but over the years they have got less and less, until one year you don’t even hear them. It’s worrying.

“That’s why I think we’ve got to do something. If you don’t have the habitats they need, they won’t have a chance. We’ve put in a one-and-a-half acre turtle dove feeding plot full of plants that bear the seeds they eat, and this year I’ve been putting out supplementary seed food as well. We’ve also put in more than a kilometre of new hedgerow to create more nesting habitat.

“It’s been two years since turtle doves nested on the farm. I haven’t seen them yet this year, but we’ll see. It takes time to get the birds to return once you’ve lost them, and the hedgerows only grow so fast – as much as I’d like them to grow faster. I just hope they come back to breed on the farm soon. That will be a sign that what we’re doing is working and their numbers are starting to go up instead of down.”

James Cartlidge MP, RSPB Species Champion for turtle dove: “I am proud to be the ‘Species Champion’ of the turtle dove, and I am very impressed to see the work that one of our local farmers is doing to secure the future of this species in my constituency. In a week when the House of Commons has tightened the law around ivory trade, it is a reminder of the commitment at government and parliamentary level to increase our protection of our vulnerable species and environment.”

The continuing plight of the turtle dove has become a poignant reminder of the need for UK agricultural policy after Brexit to do more to address the loss of farmland wildlife and ensure British farming is sustainable for the environment as well as profitable for farmers.

Sam Lee, RSPB Senior Conservation Officer: “We’re absolutely delighted to have James Cartlidge as a Species Champion for turtle doves. His support and advocacy for turtle dove conservation and for farmers like Nick who are trying to do as much as they can to improve the outlook for turtle doves couldn’t come at a more important time.

“As we prepare to leave the EU, we have a once-in-a-lifetime opportunity to transform farming in the UK to make it truly sustainable – for nature and for farmers – by supporting farmers to deliver environmental benefits. If we get it right, there is every chance that in the long term turtle doves could again be a familiar sight and sound of the British countryside in summer.”

RSPB Senior Parliamentary Affairs Officer, Robert Lingard: “We want MPs to raise awareness of the species they are championing and the causes of their decline, in Parliament and in their constituencies. Ultimately we want a world richer in nature, where species are valued and thriving, and where declines in their populations have not just been halted, but reversed. Members of Parliament have a vital role to play in this.”

Operation Turtle Dove, a partnership between the RSPB, Natural England, and Pensthorpe Conservation Trust, is working with farmers and landowners in turtle dove hotspots to restore lost habitat and increase the numbers of birds breeding and rearing young. The support of politicians for implementing well-designed agricultural policy that promotes environmentally sustainable farming is seen as being vital to the success of efforts to save turtle doves. Find out more at www.operationturtledove.org

Published by the RSPB.

The Voice of the Turtle Dove

Champions stepping up to save turtle doves in 2018

June has been a BIG month for turtle doves. One of the UK’s (and Europe’s) most threatened birds, their plight has inspired farmers, politicians, birders and nature-lovers to step up to help save them.

South Suffolk MP James Cartlidge has become the latest RSPB Species Champion and lent his name to efforts to halt the decline in the number of turtle doves.

The RSPB's warning that there's been a sharp decline in the number of Turtle Doves in the east and they've been placed on the list of threatened species.

Numbers of Turtle Doves breeding in Britain have dropped by 94 per-cent over the last 20 years.

South Suffolk MP James Cartlidge emphasised the “huge importance” of people having a connection with nature as he toured a wildlife garden that has become one of East Anglia’s most innovative environmental projects.