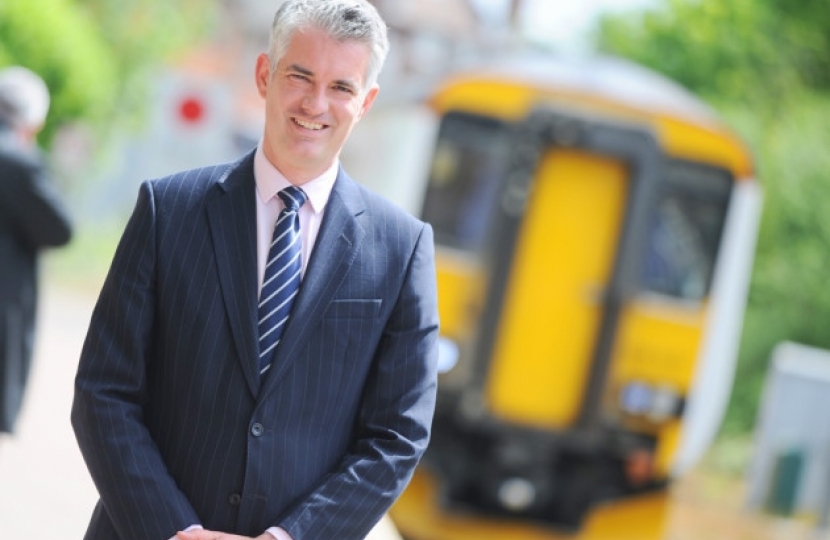 Until recently, anyone who travelled to London two or three times a week was advised by rail companies to buy a full season ticket for seven days of travel even though it is not used on most days.

James held an Adjournment debate in March 2016 calling on rail companies to introduce “flexible season tickets” for commuters who travel to work three or four days a week.

Mr Cartlidge said: “The labour market has changed substantially in the last 10 years and our rail services should adapt to reflect the fact that workers are no longer required to work from their offices five days a week.

“Working families in my constituency should not be penalised for flexible working conditions that allow them to juggle their work and family commitments.

“Ultimately, a flexible season ticket would also help to reduce overcrowding on the trains as individuals would be encouraged to work from home where possible.”

The government recently announced the introduction of a new government body, Great British Railways, who will take over the operation of the nation's trains across the country.

The new body will sell tickets, organise timetables, and set prices for all services. It will hire private companies like Abellio, Stagecoach or First Group to operate the trains. The good news is that they will also start selling part-time season tickets to commuters who want to travel to work two or three days a week. The Department for Transport has said that this would offer savings of hundreds of pounds to part-time commuters.

Welcoming the changes, James said: "‘I argued consistently prior to covid for part-time season tickets, including holding my first Parliamentary adjournment debate on the matter, because I felt strongly that the pricing system for rail travel must reflect modern working patterns.

"This has become even more important with Covid, given a raft of reputable surveys showing employees not wanting to return to the office full time, but flexibly, maybe 3 days a week.

"I therefore warmly welcome the announcement of this major step forward in flexible ticketing, including part time options. Of course, commuters will understandably want to see the exact details applying to their particular journey, but this sounds like a huge step forward to a rail ticket system in line with the way people want to commute compared to traditional assumptions."

End of Greater Anglia as Great British Railways is born

Greater Anglia will cease to run rail services later this year when a new government body, Great British Railways, takes over the operation of the nation's trains across the country.

James Cartlidge MP: We must expand the trial of flexible season tickets and cut the cost of rail travel for part-time commuters

Regular commuters who don’t use trains every day of the week are being short-changed. It’s time to modernise ticketing and make fares fair, writes James Cartlidge MP

Cheaper season tickets for part-time workers would pay for itself, claims Suffolk MP

Flexible ticketing would pay for itself enticing skilled people and full-time mums back into the workplace, a Suffolk MP has said.

South Suffolk MP James Cartlidge is to bring up the plight of part-time commuters to the House of Commons at an adjournment debate tomorrow.

South Suffolk MP James Cartlidge has stepped up calls for a better ticket deal for part-time commuters on the railways.